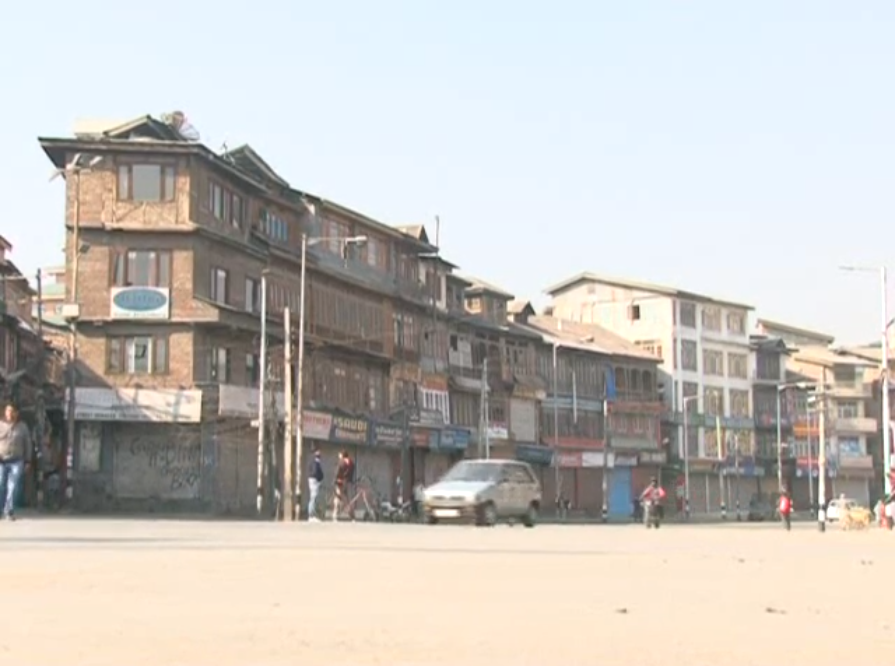 Srinagar, Oct 22 (KINS): Normal life was on Monday crippled as shops and business establishments were closed and traffic was off the roads in Kashmir valley due to a strike called by separatists against six civilian deaths in an explosion in Kulgam district.
Curfew-like restrictions were imposed in Shehar-e-Khas (SeK) and downtown, besides some areas in civil Lines and old city in Srinagar as a precautionary measure following strike called by separatists.
Restrictions were also imposed since early Monday morning in twin south Kashmir districts of Pulwama and Kulgam while security forces were deployed in strength in Anantnag and Shopian to prevent any protests against the killings.

Work in government offices and banks were affected while all educational institutes were closed in view of the strike in Kashmir valley, where train services were suspended for security reasons.
Shops and business establishments were closed and traffic was off the road in Civil Lines and uptown Srinagar though few private vehicles, particularly two-wheelers, could be seen plying on some routes in restriction-free areas.
Business and other activities remained crippled in main business hubs of the city, including historic Lal Chowk, the nerve-centre of summer capital, Budshah Chowk, Regal Chowk, Maisuma, Hari Singh High Street (HSHS), Batmaloo, Moulana Azad Road, Residency Road and Dalgate.
Additional security forces, wearing bullet proof jackets and holding weapons and lathis in their hands, were seen patrolling the streets in restriction-free areas to prevent any untoward incident.
Joint Resistance Alliance, comprising of Syed Ali Shah Geelani, Mirwaiz Moulvi Omar Farooq and Mohammad Yaseen Malik, had called for strike against the deaths.
Six civilians were killed and around 40 others injured when a blast ripped through a gunfight site in Laroo village in Jammu and Kashmir on Sunday. Security forces had killed three Kashmiri militants in Laroo. It was immediately followed by a civilian protest. Just as a large crowd gathered at the encounter site a massive explosion occurred.
Hundreds of security forces and state police personnel were deployed in major towns and tehsil headquarters in south Kashmir districts of Kulgam and Pulwama to enforce curfew-like restrictions and stop protests. Locals alleged that they were not allowed to come out of their houses since early this morning.
“Security forces have been make announcements through loudspeakers, directing people top remain indoors,” a resident of Kugam told KINS.
Shops and business establishment were also closed and traffic was off the roads in Shopian and Anantnag in support of the strike.
Life also came to a grinding halt in central Kashmir districts of Budgam and Ganderbal in support of the strike called by separatists.
A report from Baramulla said life was crippled in this and other north Kashmir towns and tehsil headquarters, where shops were closed and traffic was off the road in support of the strike. Additional security forces were deployed in entire north Kashmir to prevent any law and order problem.

No relief from traffic jams on Sgr-Jmu highway, commuters suffer

DDC results: Fate of 4200 candidates to be decided tomorrow

Enough evidence against Mirwaiz, others in funding case: NIA