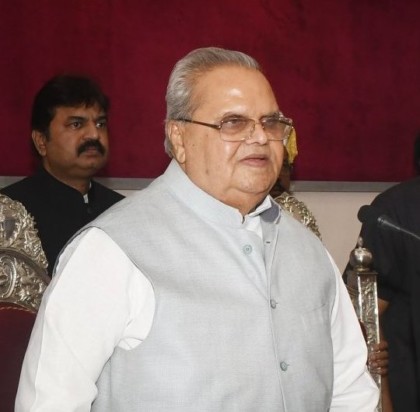 SRINAGAR: Days after exposing the illegal recruitment in Jammu and Kashmir Bank, Governor Satya Pal Malik Wednesday called it a “wonderful institution”.
Few days before, Malik in an interview had said that a group of 40 candidates met him and told him that they had been dropped from the selection list despite qualifying the exams as well as interview for the recruitment in Jammu and Kashmir Bank.
“I called chairman of the bank, I told him I don’t want loans for anyone, I don’t want settlement of loans, I want jobs for these youth who have qualified the exams. The chairman told me that these were not just 30 but 582 cases, where qualified youth were not given jobs,” Malik said in the interview.
However, on Wednesday, Malik claimed that he did not leveled any allegations against the JK Bank.
“It is JK Bank people who told me about the illegal recruitment and is not necessary it is a fact. JK Bank is doing a great job and is wonderful institution,” the Governor said. “I repeated what the youth who had come and told me,” he added.

Covid-19 likely to stay with us forever, says DAK

Lt Governor expresses gratitude to Hon’ble Prime Minister for sanctioning Ex-gratia of Rs 2 lakh to Kin of those who lost their lives in unfortunate incident of flash flood near Shri Amarnath ji cave
Rs 50,000 to be given to the injured