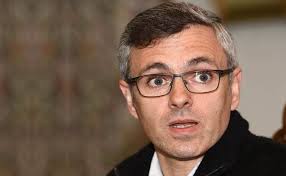 Prime Minister Imran Khan-led Pakistan government must to do some soul searching on India’s legitimate concerns to make way for a process of engagement on Kashmir, National Conference leader Omar Abdullah has said.
The senior Kashmiri politician said that while a one-off summit-based approach is not the answer, any hopes of a proper dialogue on the issue, “insulated from forces that are inimical to a dialogue on both sides of the border”, would have to wait to be realised at the end of India’s general election cycle in May 2019.
“While we are going through our election process, I think Pakistan needs to do a bit of soul searching in terms of addressing legitimate concerns that India has,” he said.
The former Jammu and Kashmir chief minister, who was in London to participate in an event organised by the International Institute for Strategic Studies (IISS) around changing the narratives within the India-Pakistan bilateral context, said the Pakistan government’s decisions such as letting Hafiz Saeed “roam free” had proved a setback to the much-needed confidence building measures.
“The recent decision of the Imran Khan government to release 20 stamps on Kashmir does not help, when instead of confidence building measures we have steps that break confidence,”Abdullah said on the sidelines of the event in London on Friday.
The release of some 20 postal stamps, glorifying Kashmiri militant Burhan Wani and others, by Pakistan was one of the reasons India cited to call of a proposed meeting between External Affairs Minister Sushma Swaraj and her Pakistani counterpart Shah Mehmood Qureshi in New York in September.
“Pakistan is our neighbour; whatever concerns we have with Pakistan, we have accepted that war is not an option. So, the only option available to us is talks. We need to resolve our differences through dialogue. But for that, at some stage, Pakistan will also have to take India’s concerns on board,” he said.
Abdullah also lamented the “vast gap” between the Government of India and its representative in Jammu and Kashmir – Governor Satya Pal Malik, and the youth of J&K, which needs to be narrowed urgently.
He said: “The youth of Jammu and Kashmir are perhaps more alienated today than they have been since the early 1990s; when educated youngsters and people with secure jobs are joining the ranks of militancy. And that’s a very worrying sign.
“At the moment, it is about hoping that some smaller corrective measures can be taken now to reduce the levels of alienation, with a higher degree of engagement once we are through with this election cycle.”
AS Dulat, former Intelligence Bureau (IB) Special Director and former Research and Analysis Wing (RAW) chief who was among the participants at the IISS event, also expressed hope that dialogue would be re-initiated between India and Pakistan soon.
“We should talk and never stop talking. I remain optimistic on a solution in Kashmir,” said Dulat, who pointed to former Pakistan President Pervez Musharraf’s four-point formula dating back to 2006 as a “good starting point”.
“If that agreement had been worked out between (Gen Pervez) Musharraf and Dr Manmohan Singh, my assessment is that we would have had at least 15 years of peace in Kashmir,” he said.
Congress party spokesperson Manish Tewari explained that the aim of the London event was to explore the building blocks of a narrative which can correct perceptions that India and Pakistan have about each other.
“There is a feeling that confidence building measures and the creation of a positive narrative have to precede conflict resolution. It is a step by step process and every incremental step would then add up to a whole,” he said.
Other speakers at the event, including Pakistan-based ‘The News’ daily Editor Aamir Ghauri, proposed exchange programmes for Indian and Pakistani journalists and a freer flow of people on both sides of the border to foster greater understanding. (PTI)

Government approves renaming of 25 places in past one year