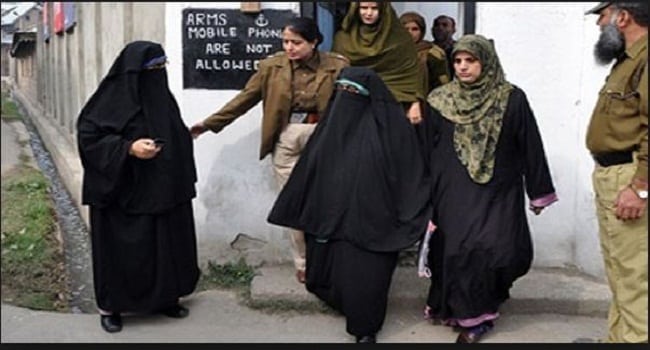 The trio were arrested by NIA on 06.07.2018 and are since lodged in Tihar Jail, Delhi.
The NIA in its press statement said that DeM has been ‘inciting the general populace of Kashmir for an armed rebellion against the Government of India with aid and assistance of terrorist organizations based in Pakistan’.

“The above accused were using various media platforms like Twitter, Facebook, YouTube, TV Channels including channels in Pakistan to spread insurrectionary imputations and hateful messages and speeches against India. DEM through Aasiya Andrabi and others, openly advocates secession of Jammu & Kashmir from the Union of India and its merger with Pakistan through violent means,” statement reads.

The statement said that on 27/04/2018, a case vide FIR No. RC-17/2018/NIA-DLI under sections 120B, 121, 121A, 124A, 153A, 153B and 505 of the Indian Penal Code, & Sections 18, 20, 38 and 39 of Unlawful Activities (Prevention) Act, 1967 was registered in NIA Police Station, Delhi against Aasiya Andrabi, Sofi Fehmeeda, Naheeda Nasreen & others of DEM.
“​ Investigation has established that Aasiya Andrabi is heading Dukhtaran-E-Millat as its Chief and has used social media and other platforms to abet waging of war against Government of India. She is spreading seditious and insurrectionary imputations against Government of India. She is promoting ill-will and enmity between different communities in India on ground of religion. Investigation has also established that she has close contacts with designated Global Terrorist Hafeez Mohammad Saeed who is head of Jamaat-Ud-Dawah (JuD) and Lashkar-E-Toiba (LeT), internationally designated terrorist organizations that are based in Pakistan. These organizations are also proscribed under the Unlawful Activities (Prevention) Act. She has used public platforms to incite youth of Kashmir to rise in armed insurrection against the Government of India with an object of achieving cessation of Kashmir from India and its merger with Pakistan,” the statement reads.

The statement further claims that i’nvestigation has established that Sofi Fehmeeda, as Personal Secretary to Chief of DEM and also Press Secretary of Dukhtaran-E-Millat, and Naheeda Nasreen as its General Secretary have been instrumental in use of social media and other platforms to abet waging of war against the Indian Government besides spreading seditious and insurrectionary imputations against it, and are promoting ill-will and enmity between different communities in India on grounds of religion’.

“They have collected funds to carry out terrorist activities of Dukhtaran-E-Millat. They have used public platforms to incite youth of Kashmir to rise in armed rebellion against the Government of India with an object of securing cessation of Kashmir from India and its merger with Pakistan,” it reads.

” Further investigation against the other members and associates of Dukhtaran-E-Millat continues,” it reads

Advisor Ganai to conduct public hearing in Srinagar on November 15

Changing names of cities an attempt to wipe out our pluralistic character: Dr Farooq

‘Modi Govt to take important decision on Article 35A’