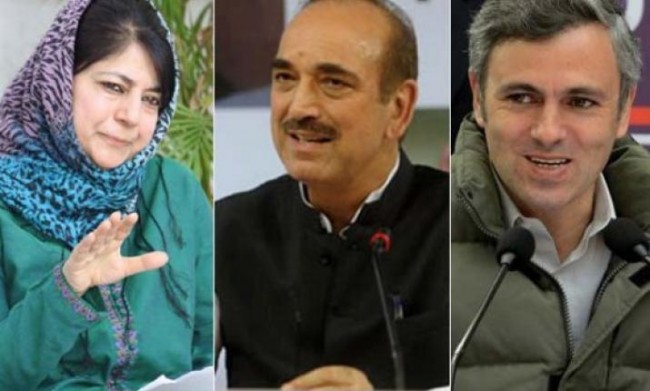 Srinagar: Confirming that negotiations are underway between NC-PDP-Congress to form the government in Jammu and Kashmir, Leader of opposition Rajya Sabhak, congress member Ghulam Nabi Azad said that ‘it’s on a suggestion level’.

“We, parties, had a view that why not join together and form the government. We are not at a stage to form government but at a suggestion level negotiations are happening,” Azad told media persons on Wednesday.

The state is currently under governor’s rule which cannot be extended after it completed its six-month period on December 19. It is proposed to impose President’s rule thereafter but the 87-member assembly is not being dissolved, according to Governor Satyapal Mallik.
A popular government headed by the Peoples Democratic Party’s Mehbooba Mufti fell when its partner BJP pulled out of the ruling coalition on June 16.
Political circles have been agog with speculation that behind the scene efforts were underway to prop up a government headed by Sajjad Lone’s People Conference, which has only two MLAs but which would be banking on support by the 25 MLAs of BJP. However, this combination would fall short of the required majority of 44 which is sought to be made by splitting the PDP which has been rocked by dissidents.

I will bear educational expenses of children of TeH leader Hafizullah Mir: Ahsan Untoo

Despite hefty fines, no letup in COVID SOP violations in Kashmir

My mother is not a terrorist, says Sana Iltija, daughter of Mehbooba Mufti