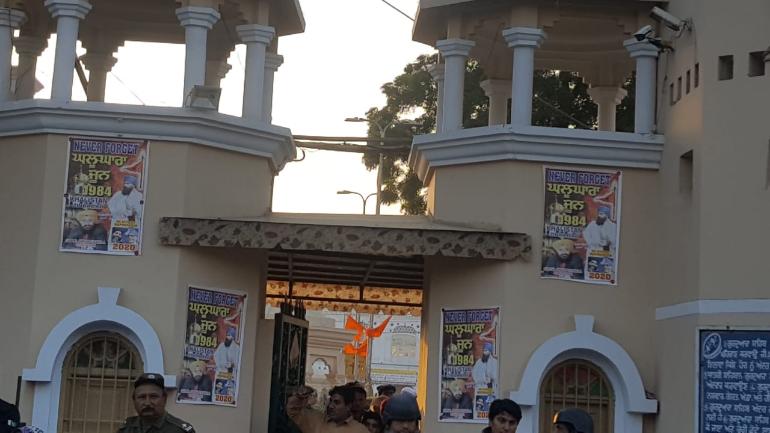 Amid the religious diplomacy underway between New Delhi and Islamabad, security concerns for India continue with pro-Khalistan posters being spotted at Sikh pilgrimage sites across Pakistan.

3,800 Indian Sikh pilgrims have been issued visas by Pakistan to visit Gurudwara Nankana Sahib to participate in the 549th birth anniversary celebrations of Baba Guru Nanak Dev Ji in Pakistan from November 21 to 30.

Photos of anti-India secessionist movement supporting the cause of Khalistan within the premises of the Gurudwaras, particularly Nankana Sahib, which has been decked up for the occasion.

Under the framework of the Pakistan-India Protocol on Visits to Religious Shrines of 1974, both nations have to allow these religious pilgrimages to be carried out every year. Therefore, this year, 144 Pakistani Zaireen (Muslim pilgrims) are visiting Sirhind in India for the annual Urs celebrations and to pay obeisance at the Shrine of Sheikh Faruqi Sirhindi (Mujaddid Alf Sani).

On the Indian side, pilgrims from the other side of the border have been accompanied by diplomats from the Pakistani mission in New Delhi including high commissioner Sohail Mahmood, for years. But Indian diplomats in Pakistan have been barred from entering Gurudwaras in Pakistan citing security concerns, a couple of times in the past.

Sources said the most important reason why Indian diplomats have not been allowed inside because these Gurudwaras donned anti-India posters and representatives of the shrine from Pakistan use the opportunity to indoctrinate the Indian pilgrims towards the cause of Khalistan.

It is an issue that has seen support and backing of the establishment in Pakistan, according to intelligence sources.

In a statement issued by the Pakistan High Commission in New Delhi, “This is by far the largest number of visas issued in recent years to Sikh pilgrims for Baba Guru Nanak’s birth anniversary celebrations, well beyond the maximum number of 3,000, mutually agreed between the two countries for this event.”

Pakistan High Commissioner Sohail Mahmood said this was a “special gesture” by the government, in view of the 550th anniversary celebrations of Baba Guru Nanak commencing in earnest from this year.

According to a statement issued by the Pakistani mission, the high commissioner himself was welcomed by Sajjada Nasheen Khalifa Syed Mohammed Sadiq Raza, other trustees, and members of local administration at Rouza Sharif of Hazrat Mujadid Alf Sani in Sirhind, where he and his staff offered prayers along with the pilgrims. Later, the high commissioner held an interactive session with Pakistani Zaireen, who shared their observations and suggestions.