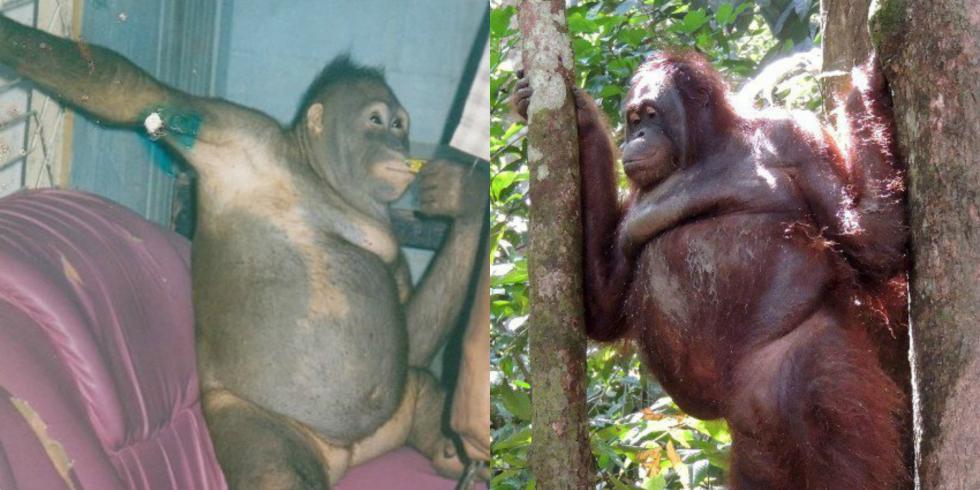 A shocking and grotesque incident of sexual assault and bestiality has come to light on the island of Borneo. A female orangutan was rescued, after being prostituted for six years. The poor animal was chained to the wall, and shaved every day, adorned with jewellery and sprayed with perfume so that the local workers at a palm oil farm could pay and have sex with her.
Named Pony after she was recused in 2003, the Orangutan was said to have abscesses all over and extremely weak and understandably distrustful of humans when she was rescued by the Borneo Orangutan Survival Foundation UK. “It was horrifying. She was a sex slave – it was grotesque,” said Michelle Desilets, the director of the institute.
The rescuers traced her entry into prostitution to an incident of theft, when she was stolen from her mother and sold to her captors, who taught her to perform sex acts. Her rescue was not easy either — 35 policemen were forced to make the local villagers to give her up.
But thankfully, Pony has come a long way in the past 15 years.
‘The first baby steps where to make her trust us in her new home. “We tried to keep men away from her enclosure as she was afraid of them,” said Lone Droscher-Nielson, who helped rescue Pony. After her quarantine, she was slowly introduced to other orangutans, female only still. Then a couple of years later, she was slowly introduced to male caregivers, and learned to trust men again. “She didn’t seem to be afraid of them anymore and she was happy with any company she could have,” she said.
However, Pony can never be released into the wild, as she lacks the necessary skills to survive there, having spent most of her developing years in human captivity. She now lives with seven other orangutans at the Nyaru Menteng Rehabilitation Centre, and has reportedly learnt some skills.
Pony is not a random case — in fact, it highlights the plight of the thousands of orangutans, which are stolen and sold on the black market in South East Asia. Experts say that one orangutan can fetch upto £10,000, and are even bought through Facebook and Instagram! This very sorry state of wildlife is not just discouraging but angering as it violates so many laws and animal rights. If lawmakers and governments strengthen these laws and crack down on these activities with a firmer hand, then and only then will the situation change for the better.

All reports negative for coronavirus in Kashmir so far: Govt