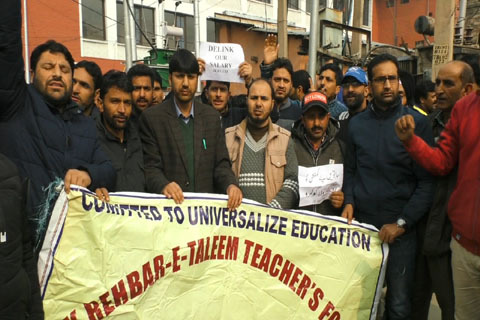 Srinagar: Rehbar-e-Taleem teachers Monday accused government of playing cruel joke with them for failing to implement the promised implementation of 7th pay commission and de-linking of their salary from Ministry of Human Resource Development (MHRD).

The decision to implement 7th pay commission and delinking of salary from MHRD was announced by Advisor to Governor Khurshid Ganai  in august this year, however, protesting teachers said that “announcement has remained an announcement only.”

“We demand regularization of services, time bound promotion, delinking of salaries from MHRD and they should disburse the pending salaries of ReTs,” protesting teachers said.

Chairman Jammu and Kashmir Rehbar-e-Taleem Teachers Forum Farooq Ahmad Tantray threatened to launch a sit-in protest in Jammu from December 10 if their demands were not fulfilled at the earliest.

“Its a cruel joke they have played with the teachers community,” they said.

Yasin Malik shifted to Soura hospital, under detention since Nov 19

Another Batch Of 457 Hajj Pilgrims Leaves For Saudi Arabia