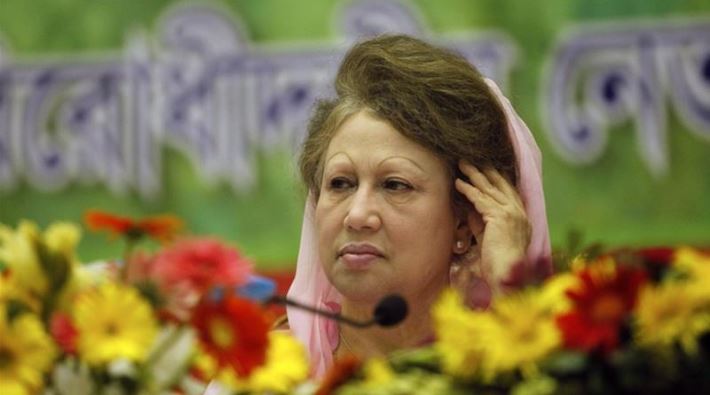 The country’s attorney general Mahbubey Alam told reporters in capital, Dhaka, on Sunday that anyone convicted and sentenced to two years or more in jail is not an eligible candidate, as per a recent Supreme Court ruling.

Zia, who has been in jail since February, is serving a 10-year sentence on a corruption conviction. In October, she was sentenced to seven years after being found guilty in another corruption case.

Zia, chief of the opposition Bangladesh Nationalist Party (BNP), had filed nomination papers for three parliamentary seats for the December 30 election, but authorities rejected her candidacy, citing the law.

Her party rejected Sunday’s announcement and vowed to challenge the election commission’s decision.

“This is an ill-motivated decision,” said Ruhul Kabir Rizvi, BNP leader. “The rejection of her nomination papers are part of the government’s blueprint to keep her away from the election.”

The elections will be held under Prime Minister Sheikh Hasina, who is seeking to return to power for a third consecutive time amid opposition accusations that she was becoming increasingly authoritarian and the opposition was being handled with an iron fist.

Bangladesh’s constitution says “a person shall be disqualified for election as, or for being, a member of parliament who has been, on conviction for a criminal offence involving moral turpitude, sentenced to imprisonment for a term of not less than two years, unless a period of five years has elapsed since his release.”

Zia served as Bangladesh’s prime minister three times, twice for full five-year terms and once for a brief period.

The 73-year old politician has been in jail since February after a court convicted her of misappropriating funds intended for an orphanage and sentenced her to five years in prison. The sentence was doubled to 10 years by a higher court in October.

Zia was also convicted of illegally raising charitable funds by using the power of her office during her second term (2001-2006) as prime minister.

The former leader faces more than 30 other charges, ranging from corruption to sedition, which her party has denounced as politically motivated. The government has denied the allegations.

Bangladeshi politics is deeply divided, with rivals Hasina and Zia, both from political dynasties, alternately ruling the country since 1991, when democracy was restored.

US on verge of defeat; will quit Afghanistan soon, claims chief Taliban negotiator