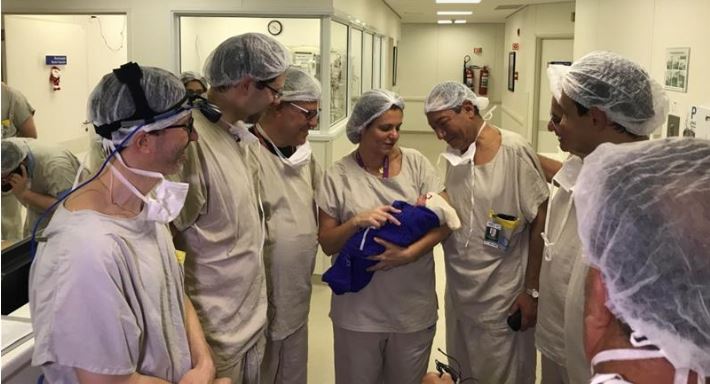 A woman in Brazil who received a womb transplanted from a dead donor has given birth to a health baby girl, in the first successful case of its kind, doctors reported.

The breakthrough operation, carried out in September 2016, shows that such transplants are feasible and could help thousands of women unable to have children due to uterine problems, according to a study published on Wednesday in The Lancet medical journal.

The case involved connecting veins from the donor uterus with the then-32-year-old’s recipient’s veins, as well as linking arteries, ligaments and vaginal canals.

It comes after 10 previously known cases of uterus transplants from deceased donors – in the United States, the Czech Republic and Turkey – failed to produce a live birth.

The girl born in the Brazilian case was delivered via caesarean section at 35 weeks and three days, and weighed 2,550 grams, the case study said.

Dani Ejzenberg, a doctor at Brazil’s Sao Paulo University hospital who led the research, said the transplant shows the technique is feasible and could offer women with uterine infertility access to a larger pool of potential donors.

The current norm for receiving a womb transplant is that the organ would come from a live family member willing to donate it.

“The numbers of people willing and committed to donate organs upon their own deaths are far larger than those of live donors, offering a much wider potential donor population,” Ejzenberg said in a statement about the results, describing the procedure as a “medical milestone”.

She added, however, that the outcomes and effects of womb donations from live and deceased donors have yet to be compared, and said the technique could still be refined and optimised.

NIA produces Kashmiri students in court, accused of being affiliates of AGH