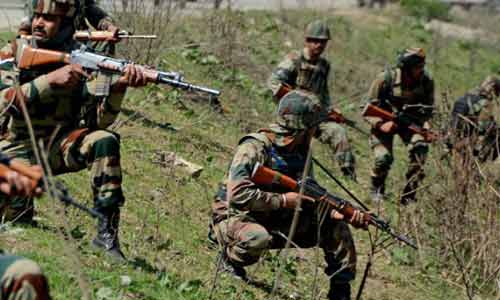 Srinagar, Dec 29 : Atleast 249 militants have been killed across Kashmir this year so far and this is a big success to the security agencies a senior army officer said on Saturday.

A senior army officer said that killing 249 militants is a set back as with this we are able to crush the terrorism in Kashmir at larger.

The official said that there are many factors about the youths who are joining militancy ranks, but “one certainly is the radicalization and which we all talk about another is alienation and more important than that is proxy war that is being played out here by our neighbor Pakistan and that is a major factor for which youngsters going wayward and getting recruited into this unending spiral of violence.

Officer while appealing to youth of valley said that Army always had been to shun violence whatever grievances they have.

He however added that there is a government and democratic process in place. They need to use the process and shun the gun culture.

Officer said that army was here to conduct the counter militant operations and “we will continue with our operations but at the same time, we are appealing to the youngsters to shun the gun culture, surrender and even during operations we give an opportunity to the militants to so that they can live a happy life.

The four Jaish militants who were killed in a gun battle were later identified as Waseem Akram (27) of Tikken village, Sajad Khandey son of Mohammad Akbar of Rajpora village, Muzamil Nabi Dar (20) alias Abu Junaid of Rajpora village and fourth one a foreigner militant was killed with them.