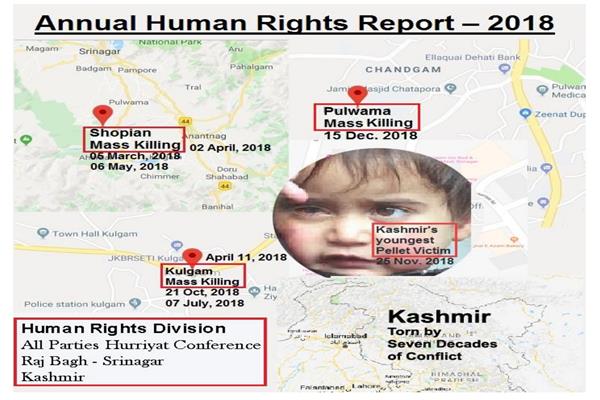 Srinagar, Dec 31 : Hurriyat Conference (M) Chairman Mirwaiz Umar Farooq Monday released “Human Rights Report 2018”, prepared by the human rights division of the amalgam.
According to a statement the report encompasses the detail of human rights violation that occurred in Kashmir during the year 2018, as per the report, the year 2018 witnessed the total number of 543 deaths occurred due to the ongoing conflict in J&K, the highest in the decade. Out of 543 persons, 161 were Civilians, 127 Government Forces Personnel, and 255 Armed youth. Besides, 19 men and 8 women total 27 persons got killed on the other side of the line of divide reportedly due to continuous acrimony and exchange of fire between the forces deployed there.
Out of males 141, females 20, total 161 civilians killed, 67 civilians were killed by government forces during cordon and search operations (CASO), Post-encounter clashes or by firing live ammunition and pellets. 34 civilians were killed by un-known gunmen. 32 civilians were killed in firing or shelling across the line of divide in Jammu & Kashmir. 03 civilians were allegedly killed by armed youth for being Indian army informers. 14 civilians were killed by blasts that occurred by grenades, shells or by mysterious blasts. 03 civilians lost their life by cardiac arrest due to shock due to the harassment/fear caused by forces. 01 civilian died due to suffocation caused by tear smoke shells. 02 died in Police custody. 01 civilian was used by forces as human shield. 01 person lost his life due to stone injury during a stone-pelting incident. 03 civilians were crushed by government forces vehicles.
The report has also mentioned, due to imposition of repeated curfews and restrictions, the congressional Friday prayers at Kashmir’s Historic Grand Mosque (Jama Masjid) Srinagar were restricted 16 Fridays. The Kashmir’s chief religious cleric Mirwaiz Dr. Molvi Mohammad Umar Farooq and Chairman APHC was 17 times barred during the year on the eve of Fridays from performing religious obligations. He was kept for 113 days in house confinement.
As per the report, nearly 4,524 civilians had been injured, and at least 724 of them had suffered injuries to their eyes during the year 2018. On a single day on April 2, 2018 at least 63 civilians with pellet and bullets injuries were admitted in different hospitals across Kashmir. Out of 63 wounded, 39 were having metal-pellet injuries and 35 were hit in eye, others were having bullet injuries. On November 25, 40 persons inflicted with pellet and bullet injuries were admitted in district hospital Shopian, 19-month old baby girl from Shopian was also injured on this fatal day. 17 receive pellet injuries on 02 September in Laddi village in Shopian and 15 youth sustain pellet injuries in Panzan Budgam on 27 September and on May 07, Srinagar hospitals receive 45 youth with bullet and pellet injuries. Over 5,600 mostly youth, were detained at various police stations in the valley in 2018 alone. Those arrested under the PSA have been lodged in jails outside the valley and also, in many cases, in different jails outside the state.
The report has in a detailed mention about the physical assault of journalists by the government forces while performing their professional duties.
The reports also brief about the efforts of APHC in awakening the world community about the human rights violations in Kashmir, besides, a mention of United Nations report on Kashmir.
“The APHC during 2018 while speeding up its efforts to turn the attention of International community towards Human Rights violation in Kashmir through several petitions, letters and other communications to United Nations, Organisation of Islamic Cooperation (OIC) and other Human Rights groups highlighted the bizarre state of human rights in Kashmir and sought their influence to end the worst repression and oppression of Kashmiris. In a letter dated 10 December, 2018 from Chairman Mirwaiz Mohammad Umar Farooq to United Nations Secretary-General Antonio Guterres, APHC demanded the 5 establishments of a commission of inquiry to conduct a comprehensive and independent international investigation into allegations of human rights violations in Kashmir,” reads the report.
Throughout the year the state administration imposed curfew and restrictions and ban on mobile internet on many occasions. Pertinently, State exercises curfew as a tool to suppress civil liberties and inflict collective punishment on the entire population. Kashmiris have been denied of right to protest, demonstrations and right to peaceful march.