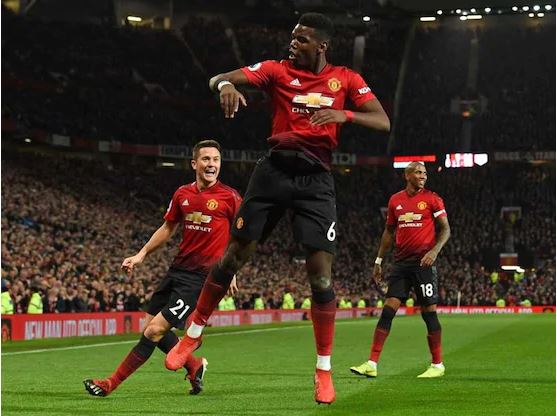 Paul Pogba scored twice for the second time in five days as Manchester United’s revival since Ole Gunnar Solskjaer replaced the sacked Jose Mourinho continued unabated with a 4-1 thrashing of Bournemouth at Old Trafford. A third consecutive victory since Solskjaer took caretaker charge until the end of the season keeps United eight points adrift of Chelsea in the fight for a top-four finish. Marcus Rashford also shone as the England international’s stunning run and cross teed up Pogba’s opener before he scored United’s third.

Nathan Ake pulled a goal back for Bournemouth just before half-time, but Romelu Lukaku came off the bench to round off the scoring before Eric Bailly was shown a late red card to leave United to finish with 10 men.

The change in mood around United in the 12 days since Mourinho was sackedis palpable, no more so in the performances of Pogba who was discarded from the Portuguese’s starting line-up for his final three league games in charge.

The French World Cup winner played a part in four of United’s five goals at Cardiff last weekend to get Solskjaer off to a flying start before scoring twice against Huddersfield on Boxing Day.

Solskjaer has spoken of his desire to see Pogba break into the box more regularly and he had the simplest of tasks to prod the ball into an empty net after Rashford had bewildered the Bournemouth defence.

Ake and Diego Rico were left beaten by Rashford’s combination of fleet-footed dribbling and pace before his cross perfectly picked out Pogba’s run.

The roles were reversed 10 minutes later when this time Pogba’s header teed up Rashford for a powerful strike that was deflected just behind.

However, in stark contrast to the final days of Mourinho’s tenure, it seemed only a matter of time before United struck again and once more it was Pogba who provided the finish with a bullet header from Ander Herrera’s cross.

Unlike Pogba, Nemanja Matic was one of Mourinho’s most trusted lieutenants but the Serbian has also epitomised the change in tack orchestrated by Solskjaer with the former Chelsea midfielder much more willing to look for a forward rather than sideways pass.

And Matic began the move for United’s third when he picked out Anthony Martial’s run and the Frenchman’s cross with the outside of his boot was turned home by Rashford.

For all the improvements of late, though, Solskjaer is still waiting for a first clean sheet since November as Ake beat Matic to power home David Brooks’s cross.

Rashford should have added to his tally when put clean through by Pogba, but didn’t get enough elevation on his attempted chip over Asmir Begovic before making way for Lukaku 20 minutes from time.

And the Belgian netted almost instantly when he squeezed the ball past Begovic on his weaker right foot from another Pogba pass.

Only the post then denied Pogba a first ever hat-trick when his low strike from the edge of the box came off the woodwork.

But United had to see out the final 11 minutes a man light after Bailly needlessly lunged in on Ryan Fraser to see a straight red card.

Shoaib Akhtar backs Afridi’s claims: ‘I witnessed some of it with my own eyes’