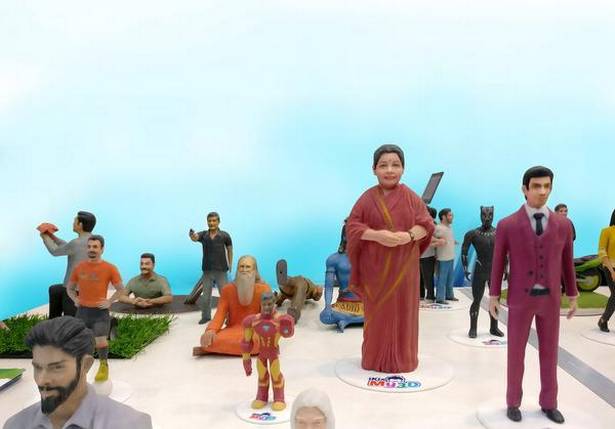 We’ve often seen actors playing larger-than-life characters on the big screen. But what if their life-sized characters were shrunk to tiny models? This was the moot question that drove iKix My3D to create miniature models of famous personalities, including the late Tamil Nadu Chief Minister J Jayalalithaa, Rajinikanth, Kamal Haasan, Vijay Sethupathi and Anirudh Ravichander, to mention a few.

iKix India, a company that has been employed in the business of designing 3D architectural models for over a decade, started its sister concern — iKix My3D — in April 2018, with the purpose of creating 3D printed replicas of celebrities for its customers. “Since we are experienced in architectural modelling, we thought of creating 3D character models, which have become big in the US. And that’s how our journey began,” says Praveen Daniel, Location Head, iKix My3D. Taking us through the designing process, Daniel says that the company roped in a bunch of digital sculptures, who were trained in graphic designing softwares like Maya.

Given that Tamil Nadu is a State that worships cine stars, it isn’t surprising that the statuettes of Tamil film personalities are a hit among customers. But the company’s speciality lies in its customised figurines that come with a predefined shape and size.

For instance, if someone wants his/her own miniature model, then he/she is asked to send their photos to iKix My3D. The designers, after taking a good look at the photos, develop the front and side views first. A rough sketch is sent back to the customer for confirmation. After getting it approved, the designing team creates the entire model, which is later sent for printing using the 3D printer.

“Our competitors use FDM 3D printing, while we use sandstone. When we get the photos, we start printing them layer-by-layer,” says Thayumanavan, one of the designers. According to Thayumanavan, the whole process usually takes a week, “There are a lot of options for customised figurines. Either they can select from the available models or specify their own requirements.”

The company was flooded with orders of customised Santa Claus figurines for Christmas. “If you look at any household during Christmas, people will invariably use the same Santa Claus doll every year. With our 3D modelling, we are able to merge our customer’s face on to the Santa itself,” says Daniel, adding that the Santa models were selling like hot cakes in the US.

Sure, the figurines look adorable. But not everybody can afford them, because the models are targeted for a particular sect — middle and upper middle class. Priced between ₹2,000 and ₹9,000, customers are charged depending on the size of the object.

“There’s a difference between plastic and ceramic. Yes, we can produce the models at ₹1,000. But we don’t want to do that. For natural look and feel, you shouldn’t think twice about spending a few extra notes,” he adds.

Not approaching politics as a star: Urmila Matondkar

Don’t think heroism in cinema will ever die: Salman Khan

Discrimination against women disturbs me: Bachchan

Jackie Shroff to team up with son Tiger in ‘Baaghi 3’