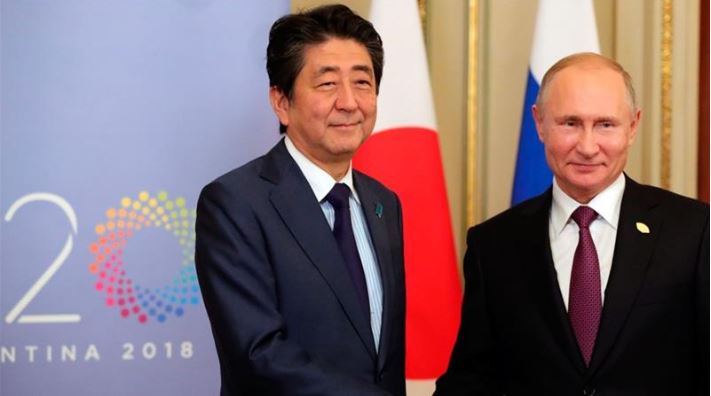 Japanese Prime Minister Shinzo Abe has vowed to push forward towards a peace treaty with Russia to formally end a decades-long territorial dispute that began during World War II over a group of islands.

Abe, who has signaled he is eager to clinch a deal, will meet Russian President Vladimir Putin later this month in their 25th summit for discussions aimed at ending the disagreement over four windswept islands seized by Soviet troops in the final days of the war.

“I’ll visit Russia later this month and intend to push forward with discussions towards a peace treaty,” he told a news conference in the western city of Ise on Friday.

There had been “absolutely no progress” on the issue for more than 70 years, he said.

Abe said that, while there were no guarantees of an agreement, the two nations had been cooperating over issues concerning the islands, as well as economically, over the past two years “as never before”.

The dispute between Russia and Japan started more than seven decades ago, with the Soviet Union occupying the strategically located Kuril chain of islands during the last days of World War II in 1945.

Both nations have laid claim over the group of four islands – known as the Southern Kurils in Russia and the Northern Territories in Japan – thereby preventing them from signing a peace accord.

India, Pak should engage in ‘meaningful dialogue’ to resolve their issues: UN chief