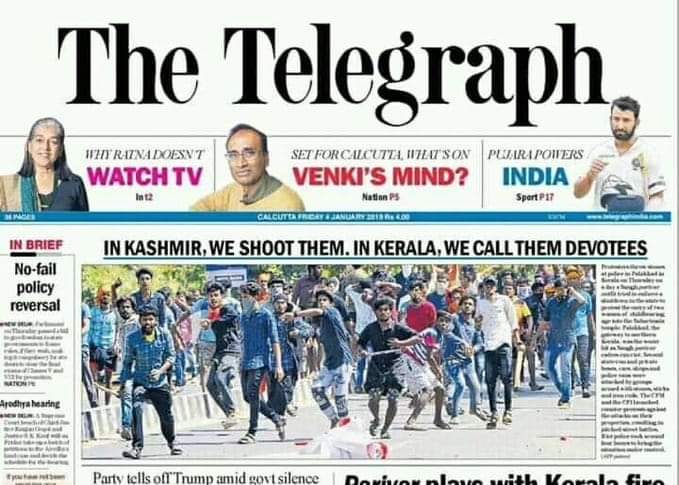 A headline from the newspaper The Telegraph goes viral in Kashmir for comparing the reaction of forces during a protest in Kashmir and in Kerala.

On Friday, a newspaper “The Telegraph” run a story about the protests that happened at Kerala in India when a Sangh-Parivar outfit tried to enforce shutdown in the state.

“Raw hooliganism aimed at subverting the law and blackmailing the judicial process erupted in several places in Kerala on Thursday in the name of a Sangh Parivar-sponsored shutdown to protest the entry of two women of childbearing age into the Sabarimala temple,” said the report.

“The protest and the resultant clashes led to at least one death and widespread destruction of property. At one point, the potential of the protest to threaten the social fabric of the progressive state was also on display,” The Telegraph reported.

The story was published on the front page of “The Telegraph India” and the focus of the story was its headline which read, “In Kashmir, we shoot them. In Kerala, we call them devotees.”

As soon as the story was published, it broke the internet and people started questioning the difference in treatment of Police and forces in Kashmir and in Kerala.

According to the report, the protests were violent and the protestors were throwing stones at the police.

The story was shared by many influential people on the internet which include some senior journalists as well. It was also retweeted by the former Chief Minister of Jammu and Kashmir, Omar Abdullah.

Yaum-e-Taqadus: Our doors open, visit us with your grievances, suggestions: JRL tells youth

Traffic on roads from Kupwara to LoC areas suspended, Kashmir highway through for one-way traffic

Attacks in Kashmir: Over 30 Panchayat members, BJP leaders, workers resign in one week

Corruption free, transparent governance my priority: LG
‘J&K to be power surplus in next 4 years’