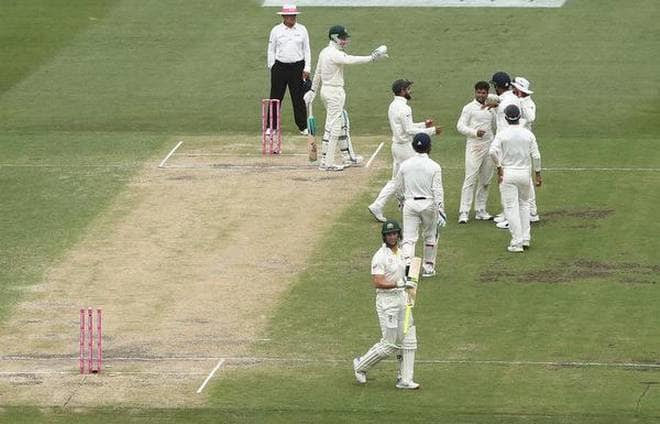 India closed in on their maiden Test series triumph in Australia before bad light and rain combined to delay the inevitable, adding more hours to a wait of 71 years.

Bad light stopped play in the final session of day three of the fourth Test as the hosts, responding to India’s mammoth first-innings total of 622 for seven declared, were reduced to 236 for six in 83.3 overs on Saturday.

With two full days play left in the game and Australia still 386 runs adrift of India’s score, the visitors will fancy their chances of winning the four-match rubber 3-1.

India first went Down Under back in 1947-48 under Lala Amarnath’s captaincy, and are yet to achieve series triumph there despite eleven attempts.

At the Sydney Cricket Ground, the players went off with an hour’s play pending in the day as bad light hampered proceedings, before rain intervened and brought out an early stumps.

This was after Kuldeep Yadav (3-71) and Ravindra Jadeja (2-62) shared five wickets to put India in a commanding position. At stumps then, Australia were trailing by 386 runs, with Peter Handscomb (28 not out) and Pat Cummins (25 not out) at the crease.

Post tea, Yadav struck on the sixth ball as Tim Paine (5) was completely foxed by the turn he was getting. The spinner pitched the ball up and the batsman, going for a drive, failed to counter it and was bowled.

Cummins and Handscomb then put on 38 runs for the seventh wicket. India requested for the second new ball after 81 overs but were denied owing to bad light.

They kept the batsmen in the middle for only a couple more overs before the umpires stopped play altogether owing to a thunderstorm in the vicinity.

Earlier, India struck four times in the middle session as Australia were reduced to 198 for five at tea.

Post lunch, Australia made the worst start possible with Marcus Harris (79) getting out before he could settle in again. In the third over after the restart, he played on off Jadeja.

In the 49th over, the left-arm spinner made it a double blow six overs later as Shaun Marsh (8) was caught at slip.

Australia barely managed to cross 150 in the 52nd over as India piled on the pressure. Unlike in the first session, only 35 runs came in the first hour of play. The pace of scoring did improve in the second hour with 41 runs taken, but India again struck twice to peg them back.

Ajinkya Rahane held a brilliant catch at short midwicket to send back Marnus Labuschagnge (38) off Mohammed Shami (1-54) soon after.

But once again, as things looked settled down, they manufactured a wicket with Head hitting a full toss straight back at Yadav and was out caught.

Earlier Harris’ half-century had helped Australia reach 122 for one at lunch.

Starting from overnight 24 for no loss, Australia quickly got off the blocks in the morning session. There wasn’t much help from the pitch for the two pacers Shami and Jasprit Bumrah (0-43) who started proceedings.

It could be seen from Jadeja being brought on to bowl in the fifth over of the morning, while left-arm wrist spinner Yadav came on to bowl three overs later.

Australia sped to 50 within seven overs of play on this third morning, adding 27 runs in 29 minutes of play in the morning. Later, they crossed 100 in the 30th over.

India’s lone success came from Yadav as Usman Khawaja (27) played a loose stroke against the spin and hit straight to Cheteshwar Pujara at mid-wicket.

Jadeja though struggled to find his control and was even hit for three fours in one by Harris, who brought up his second Test half-century off only 67 balls.

Australia had added 56 runs in the first hour of play, and then added another 38 post drinks in the morning session, as they comprehensively dominated the Indian bowling attack for only the second time in this series (after Perth).

India waited for reverse swing and brought back both pacers for another spell in the second half of this session, but both batsmen were set until then even if there was more control from the bowlers.

They brought up their 50-partnership off 103 balls on a warm day.

On day one, Cheteshwar Pujara scored his 18th Test hundred, while Rishabh Pant scored his second Test century on day two as India had piled up a massive score.

After Saudi, UAE To Give Over $6 Billion Aid Package To Pakistan: Report

India tour back on track after Bangladesh players call off strike

PSL Season V will be hosted In Pakistan, Historic Moment For The Country