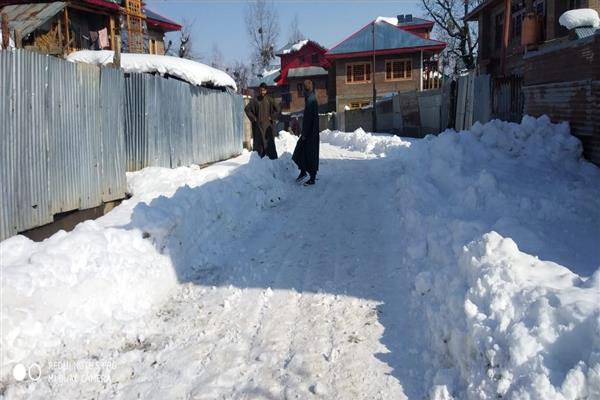 Srinagar, Jan 06 (KNS): The residents of several Langate villages on Sunday expressed resentment against the authorities in PMGSY for failing to clear the roads in their respective villages.
The residents while talking to Kashmir News Service (KNS) said that the administration has failed to clear the roads in their respective villages including Jahama road, Audoora, Nowgam, Drungsoo and Khudi villages fully, thus no vehicle ply on the roads.
“The roads were cleared by JCB but the layer of snow lying on the roads were not cleared, thus triggering slippery conditions of on these roads due to which no vehicle plies over it,” they said.
Meanwhile, President Fruit Growers and Dealers Association Mawer, Raja Akbar told KNS that the fruit laden trucks are lying in their homes but can’t reach the destinations due to the non-seriousness of the administration.
“We appeal the district administration headed by Deputy Commissioner (DC) Kupwara Khalid Jahangir to clear the roads immediately so that the fruits could be saved from any damage,” he said. (KNS)

Police Version over arrest of militant his associate in Baramulla