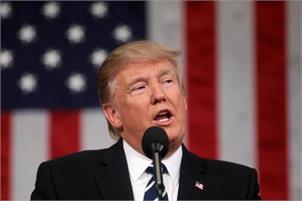 Washington, Jan 9 (PTI) President Donald Trump Wednesday asked the Democrats to allocate a whopping USD 5.7 billion funding for his controversial US-Mexico border wall plan to halt a “growing humanitarian and security crisis” and cited the cold-blooded murder of an Indian-origin police officer by an illegal immigrant to implement his signature campaign promise.

Trump’s remarks during in his maiden prime-time address to the nation from the Oval Office came amid a partial government shutdown that is days away from becoming the longest in US history.

In his eight-minute address carried live by all the major US television networks, Trump said the federal government remained shut because of the Democrats and sought to pressure on them to agree to his request for funding for the wall as a condition of ending the 18-day government shutdown that has crippled many offices.

He also tried to ramp up support among Republicans who are getting nervous about government workers and others who are feeling the pain of the shutdown.

Noting that America proudly welcomes millions of lawful immigrants who enrich the American society and contribute to the nation, he said all Americans are hurt by uncontrolled, illegal migration.

Funding for a border wall has been the main sticking point in negotiations with Democrats to reopen parts of the federal government.

A wall along the US-Mexico border was one of Trump’s signature campaign promises. Trump wants USD 5.7 billion to build the wall, even though he said repeatedly during his campaign that he would make Mexico pay for the structure.

The Democrats are refusing to allocate the money, arguing that a wall would be costly and ineffective. Mexico has rejected Trump’s demand to pay for the border wall.

The standoff triggered a partial government shutdown on December 22, shuttering nine federal departments and several smaller agencies and forcing some 800,000 workers to go on unpaid leave or work without pay. The shutdown will enter its 19th day Wednesday, making it the second-longest in history after the 21-day shutdown in 1995 96.

Trump in the past few days had threatened to declare a national emergency over the issues that would have allowed him to start building the wall with military funds without congressional authorisation.

But in Wednesday’s address he stopped short of declaring a national emergency.

Making a strong pitch for the wall, Trump said the federal government remained shut because of Democrats.

In his address, Trump described Indian-origin policeman Ronil “Ron” Singh, who was recently killed in California, as an “American hero”. He said America’s heart broke the day the young officer was “savagely murdered” in cold blood by an “illegal alien”.

Corporal Singh, 33, of the Newman Police Department was shot and killed during a traffic stop on December 26 allegedly by an illegal immigrant.

The Californian police have arrested 33-year-old illegal immigrant from Mexico identified as Gustavo Perez Arriaga on charges of killing Singh.

The president also said that 90 per cent of heroin sold in the US came from Mexico.

“Last month 20,000 migrant children were illegally brought into the United States, a dramatic increase. These children are used as human pawns by vicious coyotes and ruthless gangs. One in three women are sexually assaulted on the dangerous trek up through Mexico,” Trump said.

“Women or children are the biggest victims by far of the broken system. This is the tragic reality of illegal immigration on our southern border. This is the cycle of human suffering that I am determined to end,” he said.

“As part of an overall approach to border security law enforcement professionals have requested USD 5.7 billion for a physical barrier. At the request of Democrats, it will be a steel barrier rather than a concrete wall. This barrier is absolutely critical to border security. It’s also what are professionals at the border want and need,”Trump said.

“The border wall would very quickly pay for itself. The cost of illegal drugs exceeds USD 500 billion a year, vastly more than the USD 5.7 billion we have requested from Congress,” Trump said.

The Democrats immediately dismissed Trump’s assertion on border security and accused the president of holding the nation hostage to a partial government shutdown for more than a fortnight now.

“Much of what we have heard from President Trump throughout this senseless shutdown has been full of misinformation and even malice. The President has chosen fear,” House Speaker Nancy Pelosi said in the Democratic address to the nation immediately after Trump’s address.

“President Trump has chosen to hold hostage critical services for the health, safety and well-being of the American people and withhold the paychecks of 800,000 innocent workers across the nation many of them veterans,” she alleged.

“We don’t govern by temper tantrum. No president should pound the table and demand he gets his way or else the government shuts down, hurting millions of Americans who are treated as leverage,” he said.

US Congress panel to discuss Jammu and Kashmir today