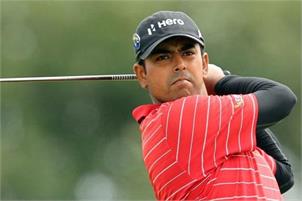 Honolulu, Jan 13 (PTI) Indian golfer Anirban Lahiri ended with a one-over 71 in the third round that saw him drop to three-under 207 for a Tied-63rd spot at the Sony Open here.

The lead stayed with Matt Kuchar, who kept another clean card and shot a 4-under 66 to take a two-shot lead into the final round of the Sony Open as he goes for his second victory this season on the PGA TOUR.

In his third round, Lahiri found seven of 14 fairways and 14 of 18 greens in regulation but left no misses on putts within 10 feet.

Lahiri bogeyed the 460-yard par-4 sixth, getting on the green in 2 and three putting, moving him to one-over for the round.

His only birdie of the day came on ninth, when he landed his third shot to seven feet and holed it for a birdie.

Kuchar has made only one bogey through 54 holes at Waialae Country Club, and his 18-under 192 was the lowest 54-hole score of his career.

Andrew Putnam was two shots behind after a 67. Keith Mitchell had a 63 and was four shots behind, along with Chez Reavie (66).

Those were the only players within five shots of the lead, and all of them are chasing Kuchar. He is 2-2 in his career when leading going into the final round.