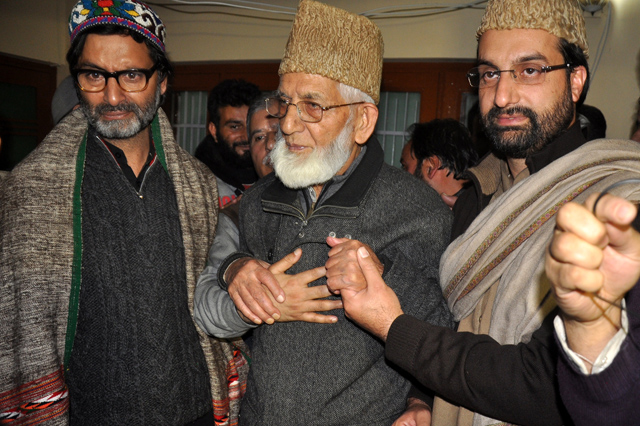 Joint Resistance Leadership (JRL) termed the recent assertions of Governor Satya Pal Malik that “there was nothing like All-Out” as far from reality and stated that Indian Home Minister Rajnath Singh and Indian army chief General Bipin Rawat have time and again claimed that anti-militancy operations in Jammu and Kashmir were being carried out under “Operation All-Out.”

JRL in a statement said that as per the figures available with the resistance camp, 2018 witnessed worst ever rights violations in Kashmir in recent past, as 355 armed youth were martyred while as 161 civilians were also martyred.

*“If this isn’t that operation all-out, then what is?, JRL asked.*

The leadership also asked that if it isn’t Operation All Out than what term would Governor like to give to daily Cordon and search operations (CASO) conducted in South, North and Central Kashmir even in such harsh winter when youth are chased and killed while homes are blown up, booking any Kashmiri including youth activists leaders under draconian PSAs and shifting them to jails in and outside the state, confining resistance leaders to homes or jails arbitrarily at will and curbing their space and to connect with people especially those that are killed. Even Kashmiri students studying outside are harassed and targeted.

Leadership said that there are footprints of Indian army and other forces in every nook and corner of the Valley and genuine dissent and people’s voice regarding their sentiment is muzzled forcibly while every peaceful political space and activity is barred or foiled by the state through its military might.

They said that resistance leadership is confined to their homes for months and years together and that the ultimate repression is on full display across Kashmir, especially since past three years.

*“In fact an all out assault has been launched on all fronts including the judiciary to quell people’s aspirations and challenge our very existence as a nation,”* the statement said.

Militarization of the valley and unbridled powers given to forces under black laws especially AFSPA is the main reason behind the worst form of state aggression in Kashmir, they said.

The Leadership said that inspite of Indian Home Minister Rajnath Singh and Indian army chief General Bipin Rawat’s claim that 200 armed youth are active in Kashmir seven lakh Indian soldiers are present in Kashmir. They said that what justification is there to keep over seven lakh forces in Kashmir to fight this minuscule number, except exert control over people by force.

The leadership said that last year, 4524 civilians especially youth were injured with lethal pellets while as the eye sight of 724 youth was snatched as pellets ruptured their eyes.

“How can GoI justify this all?, the leadership questioned.

The leadership said that the GoI’s targeting of the state subject law and Article 35-A, through a series of petitions lodged in the Supreme Court of India by its mentor RSS in a bid to change the disputed status of the State, is another form of this operation.

Meanwhile leadership said that as the hearing of 35-A is slated for January in the Indian Supreme Court, leadership is in constant touch with the various sections of society that includes civil society, traders, academics religious groups, political parties, employees and other sections and a joint program will be announced as the date for hearing is announced.

The leadership said that entire Kashmir in unison will fight every single bid aimed at changing the disputed nature and the demography of the Muslim majority state.

Police succeeds in bringing back a youth from militancy