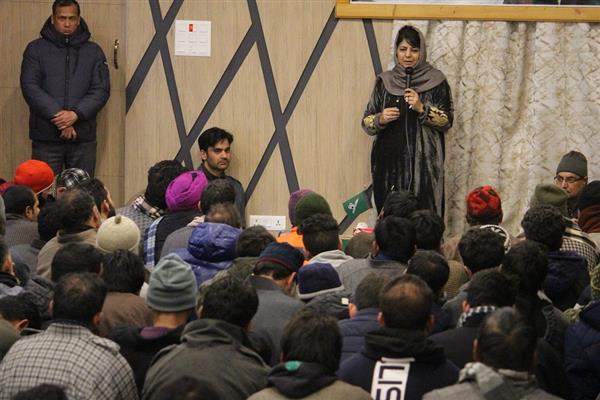 Srinagar, Jan 17 : Former Chief Minister and President Peoples Democratic Party (PDP) Mehbooba Mufti on Thursday reiterated that dialogue and reconciliation between India and Pakistan have become inevitable for the resolution of Kashmir issue and that the decades old conflict cannot be resolved by the announcement of the economic packages.
While addressing the party functionaries and activists from Rajpora assembly segment, Mehbooba said that the resilience of the PDP workers is worth to hail as they in spite of the harsh weather attended the meeting in large numbers and gave a clear message that the party is going to emerge victorious and more stronger in the coming time.
Hailing the impeccable courage and determination with which the PDP workers have been strengthening the party on the ground, Mehbooba said that the real asset for the PDP since its foundation in 1999 has been its ground level workers.
PDP President stated further that after the 2014 polls accorded fragmented mandate to state’s political landscape, PDP founder Mufti Mohammad Sayeed decided to stitch the common ground with BJP will the sole motive to reincarnate the Vajpayee era in the state and to stop the vicious cycle of unabated killings and violence. “Even when I told my father that the decision to join hands with the BJP has more risks than rewards and would decline party’s popularity in the state, he said he was ready to sacrifice everything including his own self if that resolves the decades old conflict,”
Mehbooba said, adding that her father was confident that dialogue and reconciliation would be initiated and same measures taken during Vajpayee’s time shall be witnessed once again.
“However, when on November 7, 2015 Prime Minister Modi addressed a rally in Srinagar, he announced 80 thousand crore package but exhibited reluctance in pitching for a thaw between India and Pakistan for peace in the state. This disheartened everyone including the people who had come from far flung areas to listen to the Prime Minister,” Mehbooba said.
Recalling the horrific and inhuman act of brutality that was perpetrated on 7 year old innocent girl in Rasana exactly a year ago, she recounted her struggle to give justice to the victims of Rasana case, Mehbooba stated that she went to New Delhi and made it amplly clear before the helmsmen that the PDP cannot remain the part of government until the two ministers who have openly supported the rapists aren’t sacked and until the investigation isn’t allowed to take place in a transparent manner. “I remained in the forefront as the Chief Minister to thwart any attempts aimed at the intimidation of Gujjars and Bakerwals in the state and took every measure to ensure these communities that no one is going to do any harm to them,” she said, adding that securing the secular character of the state has been the top most priority of the PDP since inception and that the party every time foiled the attempts of the fringe groups to create any communal wedge between the different religious communities living in the state with harmony and brotherhood for centuries.

BJP slams on Kashmiris, who raised ‘anti-national’ slogans in Jammu

Lt Governor joins youth in “Pedal for Peace” event
Youth are the messengers of peace, prosperity & brotherhood: Lt Governor
‘I am committed to provide each and every citizen of Jammu and Kashmir and their family members, the best possible benefits and facilities’: LG