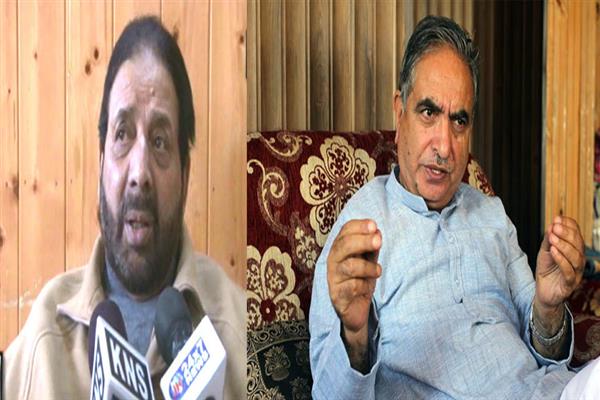 Srinagar, Jan 18 : Ahead of the Parliamentary and Assembly elections in Jammu and Kashmir, several political leaders are currently holding deliberations to revive the third front which they believe will reemerge ahead of the elections.
The political leaders who are currently in deliberations to revive the third front, claimed that front is being reemerged as an alternative to the people. “In Jammu and Kashmir, there is existence of traditional National Conference following which Peoples Democratic Party (PDP) emerged as an alternative but failed to sustain the position. In this regard, the alternative is being made available for the people, which would likely emerge ahead of the elections,” they said.
Peoples Democratic Front (PDF) Chairman, Hakeem Muhammad Yaseen said that the discussion between the likeminded people to revive the third front is going on. “Some likeminded people are currently holding meetings and deliberations in this regard as there is a dire need of an alternative at this juncture,” he said.
He added that people are demanding an alternative following which a step has been taken to revive the third front here. “People are the best judge who notice each and every development. The leaders who have credibility are discussing the revival of third front at present,” he said.
Democratic Party Nationalist (DPN) President, Ghulam Hassan Mir told that the traditional party NC already exists in the State but at the same time PDP who emerged as an alternative failed to sustain, therefore some likeminded people are joining hands here to come up with an alternative.
“We have been holding meetings and discussing the revival of third front here. There is no breakthrough so far but there is every possibility of third front reemerging in the State before elections,” he added.
“It is too early to say when will it be revived again but I believe the third front will reemerge ahead of the elections,” Mir added.
However, the other leaders could not be contacted to have comments in this regard.
(KNS)

Grenade attack in Kakpora Pulwama, no loss of life

Will fight tooth and nail to defend article 35A: JRL

Constitution no less than Quran for me, have placed my faith in courts: Iltija Mufti