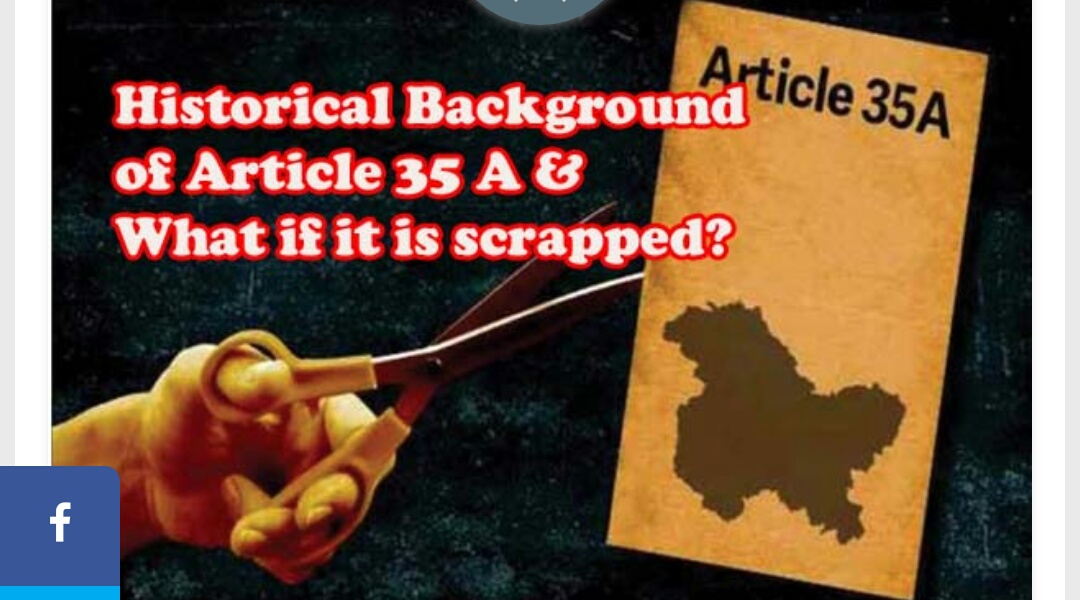 Many pandits leaders and reformist especially Jai Lal Kilam, Shanker Lal Koul, Jai Lal Jalali started agitation against for securing rights of state subject the outcome of which was that Farsi language was removed and replaced by Urdu language in the reign of Maharaja Pratab Singh ( kilam op,cit, page 290, Inside Kashmir by Pandit Prem Nath Bazaz page 86).

This had negative impact on pundit community who were not acquainted with new language fully were thrown out by Maharaja Pratab Singh. (j&k(G.R) file no.24 of 1891, kilam page no.290–291)

An influx of Urdu knowing punjabi Muslim from India came to Kashmir and maharaja recruited them. This created bitterness among pundits and they started opposing the recruitment of Indian in Kashmir courts and British residency supported them as well .

The result of this agitation was creation of state subject definition committee soon after the accession of Maharaja Hari Singh after 1926 CA ( the tribune ,Aug 27,1931, The pioneer ,sept 27 , 1931)

The new definition arrived at the committee was accepted by new Maharaja Hari Singh in 1927 . So none from India after that period was appointed in any state job in Jammu and Kashmir if he or she doesn’t own hereditary state subject document .

It is to mention here that any one domiciled in state of Jammu and Kashmir prior to death of Ranbir Singh ( 1880) was given the state subject. (the tribune 27 Aug , 1931)

The 1927 Hereditary State Subject Order granted to the state subjects the right to government office and the right to land use and ownership, which were not available to non-state subjects. ( Robinson, Body of Victim, Body of Warrior 2013, pp. 34–35.)

INSERTION OF ARTICLE 35 A INTO INDIAN CONSTITUTION:

Following the accession of Jammu and Kashmir to the Indian Union on 26 October 1947, The Maharaja ceded control over defense, external affairs and communications (the ‘ceded subjects’) to the Government of India . The Article 370 of the Constitution of India and the concomitant Constitutional Order of 1950 formalised this relationship. Discussions for furthering the relationship between the State and the Union continued, culminating in the 1952 Delhi Agreement, whereby the governments of the State and the Union agreed that Indian citizenship would be extended to all the residents of the state but the state would be empowered to legislate over the rights and privileges of the state subjects, who would now be called permanent residents. Following the adoption of the provisions of the Delhi Agreement by the Constituent Assembly of Jammu and Kashmir, the President of India issued The Constitution (Application to Jammu and Kashmir) Order, 1954, through which Indian citizenship was extended to the residents of the state, and simultaneously the Article 35A was inserted into the Indian constitution enabling the State legislature to define the privileges of the permanent residents

The Constitution (Application to Jammu and Kashmir) Order, 1954. :-

“Saving of laws with respect to permanent residents and their rights. — Notwithstanding anything contained in this Constitution, no existing law in force in the State of Jammu and Kashmir, and no law hereafter enacted by the Legislature of the State:

(a) defining the classes of persons who are, or shall be, permanent residents of the State of Jammu and Kashmir; or

(i) Employment under the State Government;

(ii) Acquisition of immovable property in the State;

(iii) Settlement in the State; or

(iv) Right to scholarships and such other forms of aid as the State Government may provide, shall be void on the ground that it is inconsistent with or takes away or abridges any rights conferred on the other citizens of India by any provision of this part.”

VIEWS OF THE THEN PRIME MINSTER OF INDIA PANDIT JAWAHAR LAL NEHRU ON ARTICLE 35A :

In his statement to the Lok Sabha on the Delhi agreement, Nehru has said :

The question of citizenship arose obviously. Full citizenship applies there. But our friends from Kashmir were very apprehensive about one or two matters. For a long time past, in the Maharaja’s time, there had been laws there preventing any outsider, that is, any person from outside Kashmir, from acquiring or holding land in Kashmir. If I mention it, in the old days the Maharaja was very much afraid of a large number of Englishmen coming and settling down there, because the climate is delectable, and acquiring property. So although most of their rights were taken away from the Maharaja under the British rule, the Maharaja stuck to this that nobody from outside should acquire land there. And that continues. So the present Government of Kashmir is very anxious to preserve that right because they are afraid, and I think rightly afraid, that Kashmir would be overrun by people whose sole qualification might be the possession of too much money and nothing else, who might buy up, and get the delectable places. Now they want to vary the old Maharaja’s laws to liberalise it, but nevertheless to have checks on the acquisition of lands by persons from outside. However, we agree that this should be cleared up. The old state’s subjects definition gave certain privileges regarding this acquisition of land, the services, and other minor things, I think, State scholarships and the rest.

So, we agreed and noted this down: ‘The State legislature shall have power to define and regulate the rights and privileges of the permanent residents of the State, more especially in regard to the acquisition of immovable property, appointments to services and like matters. Till then the existing State law should apply. (Read A G Noorani’s article on this Source : Article 35A is beyond challenge)

THE BJP, RSS AND THEIR AFFILIATE GROUPS ARE OPPOSED TO ARTICLE 35A. : –

In July 2015, an RSS-backed think-tank called the Jammu & Kashmir Study Centre first came up with the idea to challenge Article 35A in the Supreme Court. A petition was filed in the Delhi High Court against the Article. Later, it was also challenged in the Supreme Court. Mass appeal by RSS to revoke special status to Jammu and Kashmir by invoking the sentiments that constitution of India can’t be amended for Jammu and Kashmir .

It’s worth to mention here that as of September 2016, there have been 101 amendments to the Constitution of India since it was first enacted in 1950.

101 amendments are of no issue for RSS think tank but 35A according to them is illegal .

SPECIAL PROVISION FOR OTHER STATES OF INDIA :—

Their are 11 states till now with special provisions

President is authorised to provide that Governor of Maharashtra & Gujrat would have special responsibilities for:

Establishment of separate development boards for Vidarbha, Marathwada & rest of Maharashtra + Kutchh & rest of Gujrat. A report on working of these boards will be placed each year before state legislative assembly. Equitable allocation of funds for developmental expenditure over the mentioned areas. Equitable arrangements providing adequate facilities for technical education, vocational training & adequate opportunities for employment in state services

ARTICLE 371 – A → SPECIAL PROVISIONS FOR NAGALAND

Act of parliament relating to following matters would not apply to Nagaland unless state assembly so decides:

Religious & social practices of Nagas. Nagas customary law & procedure. Administration of civil or criminal justice involving decisions according to Naga customary law. Ownership & transfer of land & its resources. Special responsibility of governor wrt law & order in the state (after consulting COMs, but his decision will be final) regarding internal disturbances occurring in Naga hills mainly in Tuesang area (Special responsibility ceases if President directs so). Governor has to ensure that money provided by the GOI out of consolidated fund of India for any specific purpose, is included in the demand for grant relating to that specific purpose only, not any other. A regional council for Tuensang district, consisting of 35 members should be formed & governor in his discretion shall make all the rules & terms regarding this council.For a period of 10 years, from formation of state of Nagaland or for further period as specified by Governor, on recommendations of regional council, following provisions would be operative for Tuensang district:

Administration of Tuensang district shall be carried on by the governor.

Governor in his discretion shall arrange for equitable distribution of money, b/w Tuensang district & Rest of Nagaland, provided by center.

There shall be a minister for Tuensang affairs in state COMs.

Final decision on all matters relating to Tuensang district shall be made by governor in his discretion.

Members in Nagaland assembly from the Tuensang district are not elected directly by the people but by regional council.

ARTICLE 371 – B → SPECIAL PROVISIONS FOR ASSAM

President may provide for the constitution & functions, a committee of Legislative assembly of the state, consisting of members of that assembly elected from the tribal area of Assam. President can also direct that the governor shall have special responsibility to secure proper functioning of that committee.

President may provide for the constitution & functions, a committee of Legislative assembly of the state, consisting of members of that assembly elected from the hill areas of Manipur.

President can also direct that the governor shall have special responsibility to secure proper functioning of that committee. Governor should submit an annual report to the President regarding the administration of Hill areas

President is empowered to provide equitable opportunities & facilities for people belonging to different parts of the state in matter of public employment & education. For above purpose, President may require the state government to organize civil posts in local cadre for different parts of the state & also provide for direct recruitment to posts in local cadre (or in any such educational institution)

President may provide for establishment of an administrative tribunal in state to deal with certain disputes, relating to appointment, allotment or promotion to civil posts in state. Only SC is to exercise jurisdiction over such tribunal which means they are outside the purview of HC (President may abolish the tribunals if he thinks it is not necessary)

Legislative assembly shall not less than 30 members + 1 seat from the state in Lok Sabha & 1 in parliamentary constituency. For the purpose of protecting the rights & interest of different sections of Sikkim population, Parliament is empowered to provide number of seats in Sikkim administrative assembly for the people belonging to such sections. Governor in his discretion (On direction of President) have special responsibility for peace & equitable arrangement for socio- economic development of different sections of Sikkim.

Legislative assembly shall not be less than 40 members. Act of parliament relating to following matters would not apply to Mizoram unless state assembly so decides :

Legislative assembly shall not be less than 30 members. Governor of Arunachal Pradesh , on directions of President, shall have special responsibility for law & order in state ( May consult with COMs but his decision will be final)

ARTICLE 371 – I → SPECIAL PROVISIONS FOR GOA

Legislative assembly shall not be less than 30 members. Art 371-d will be applicable to both successor states of Andhra Pradesh post bifurcation and provisions have been made in Andhra Pradesh (Reorganisation) Act, 2014 for the same to amend Constitution accordingly. Recently devolopment : Dr. Charu Wali Khann, the petitioner is a Kashmiri Pandit woman who had married outside caste and settled outside the State of Jammu & Kashmir. She has challenged the notification dated April 20, 1927 issued by the Maharaja Bahadur of Kashmir, which takes away the right of a wife or widow otherwise available to them as state subject unless she resides in State and does not leave the state for permanent residence outside the State.

SCRAPPING OF THIS ARTICLE MEANS :

“If the constitutional provision (Article 35A) is scrapped, J&K will lose all the special privileges including the state subject law, right to property, right to employment, and right to settlement. These privileges will no longer be then restricted to permanent residents of the state as is the position today, but will be availed by the citizens of India as well,” . “Jammu and Kashmir will thus become like any other state where people from any part of India will have all these rights.”

3 Kashmiri advocates not cleared for appointment as HC judges