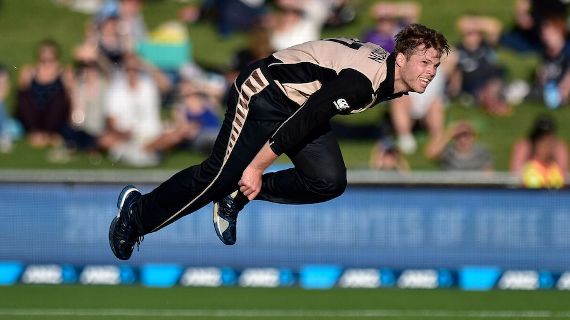 Flash, the Scarlet Speedster, is among the most fascinating superheroes. He’s the fastest in the DC universe, able to outrun even Superman. He also has the uncanny ability to duplicate himself thanks to the speed force – an energy source that enables speedsters to perform physics-defying tricks. And if Flash had the ability create a cricket bowler out of himself, it could well be New Zealand’s Lockie Ferguson.

It’s easy to imagine lightning streaks swirling behind Ferguson as he tears in to bowl. But, it isn’t so easy to spot the ball, which often comes in at 150kph. Ferguson hit that barrier twice in his very first over in international cricket in Sydney, harrying David Warner for pace. Pace like the Flash.

Ferguson enjoyed a breakout year in 2018, picking up 19 wickets in nine ODIs at an economy rate of 5.13. Only Trent Boult had more wickets for New Zealand (22) but he had the benefit of playing three more matches than Ferguson. He also made heads turn in the English T20 Blast for Derbyshire, with his yorkers and bouncers. All of which has put Ferguson – a fan of the Flash, of course – firmly on the road to the 2019 World Cup.

In fact, speed – and sport – is in Ferguson’s blood. His mother Jan was a sprinter while his father Doug was a rugby player. Oh, and his elder brother Mitch was a multi-sport-playing quick bowler before an injury stalled his career. Lockie says that competing with Mitch gave him the motivation to become the international tearaway he is today.

“Mitch was very quick, probably the quickest going around at Auckland,” Ferguson tells ESPNcricinfo. “He was in the first XI in Auckland Grammar at a very young age. He was more interested in football than cricket, though, and then had a tough injury.”

Ferguson’s pace was noted early, as he had competed with James Neesham in a fast-bowling competition on the sidelines of the New Zealand-England Test at Basin Reserve in 2008.

“I was pretty excited to go down to Basin for the Test match against England that day in front of a big crowd,” Ferguson recalls. “I actually didn’t know how quickly I could bowl until that competition came about. I went up against Neesham and kids of the same age. Neesham beat me by 1kph. He bowled a yorker or a beamer, which usually comes out a lot quicker.”

Shane Bond, it is no surprise, was a hero for Ferguson growing up, but it was actually Andre Adams who shaped his career. The usual briefing from coaches is: attack the top of off and be patient. But, during his stint as Auckland’s coach, Adams brought a fresh approach and encouraged Ferguson to outsmart batsmen.

“Bondie was definitely one hero of mine as a young, budding fast bowler and Andre Adams was the other hero,” Ferguson says. “Initially, me and Andre clashed a little bit but later we found out that we had a lot in common and he was the biggest help for me in terms of my bowling. Obviously, he recognised I could bowl quick, but he also made me focus harder on my career and pushed me to go to higher levels.

Signs of this smartness were in evidence when he unfurled back-of-the-hand slower balls – not too dissimilar from the ones Adams used to bowl back in the day – and tricked Haris Sohail and Faheem Ashraf during his 5 for 45 on a sluggish Dubai track in November 2018. More recently, he hoodwinked Thisara Perera with a slower bouncer in the one-off T20I against Sri Lanka.

Ferguson isn’t a one-trick pony, but breakneck pace is his USP. Just ask Otago’s Ryan Duffy or Pakistan’s Imam-ul-Haq. And his yorkers were on bright display in the T20 Blast, though he downplays them and instead draws attention to the yorkers of Nottinghamshire’s Harry Gurney. Beware of these two, incidentally, when they combine for Kolkata Knight Riders in the Indian Premier League.

“The highlight reel might look great with the yorkers but I just got a few wickets with them in England,” Ferguson says. “It just came out. Harry Gurney has a deceptive yorker and I wish I could bowl a yorker like him. But by no means is mine as good as his. If you want to speak about yorkers, you should talk to Gurney. I’m looking forward to playing with him at KKR.”

Ferguson’s immediate challenge is a five-ODI series against India, fresh off a 2-1 series win across the Tasman Sea.

“It’s always exciting to play India,” Ferguson says. “Not only do they bring big crowds to the game, they are a powerhouse in world cricket. And perhaps they are one of the favourites to win the World Cup. We kind of like being the underdogs who punch above the weight and it should be an exciting series.”

The bigger picture, though, is the World Cup. There are a number of exciting pacemen, led by the experienced pair of Tim Southee and Trent Boult, in the mix, but Ferguson provides a cutting edge to the attack. The injury-plagued Adam Milne, who can also set the speed gun on fire, is set to return to action in domestic cricket soon and could put himself back on the international radar. Then there are Matt Henry, Doug Bracewell, Neesham and Colin de Grandhomme. Canterbury’s beanpole quick Kyle Jamieson and Central Districts’ Ben Wheeler, who is fit again after undergoing a spinal-fusion surgery, are also knocking on the selectors’ doors following excellent spells in the Super Smash T20 tournament.

Ferguson reckons that the competition for the fast-bowling slots will bring the best out of everyone in the lead-up to the World Cup.

“New Zealand has been producing quality fast bowlers and it’s great,” he says. “And by no means that’s a fluke and there’s a lot of hard work involved. Everyone is competing and it’s hard to make this Black Caps side. I think the competition is the best thing for us because it makes us strive to be better players and that’s the culture at the Black Caps. If all us do our parts well, we can win as a whole – winning is obviously not everything, though – and that positive culture helps.”

India’s WC squad: Karthik pips Pant, Shankar in at No.4