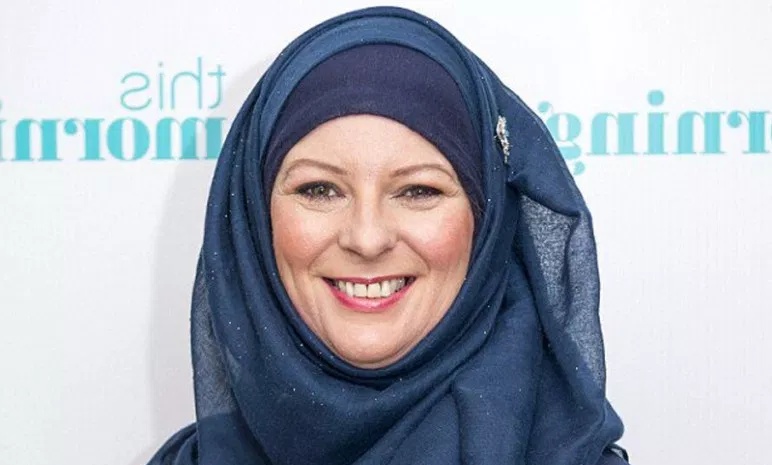 Here below is her journey to Islam and the heart-warming reaction of her family in this translated version of a recent interview:

I thank Allah for giving me the chance to spend a month with the greatest Muslims alive in this ‘Ummah’ today!

At the end of Ramadan, I went to a family home in Rafa one of the poorest refugee camps in the poorest areas,
of the over populated city in the entire world.

I had ‘Iftar’ with a family there who had about 16 mats, which were used at night to sleep on. In the middle of this tent area the mother places the meal if she has any for her children to eat…{!}

This lady greeted me at the door and it was as if she was welcoming me to the Taj Mahal not a hellhole
in the Gaza strip…!!!

”Sallam Alaykum!” she says with a smile that lights up the whole area.

I asked her: “What is it like in Rafa at Ramadan with very little food ?”

She said: ‘Alhamdulillah!’ with such joy I couldn’t help but smile. And as I sat there on the floor of this home eating what little leaves that they had; a bit of hummus, a pita bread that was our ‘Iftar’.

I got angry … really angry ! I thought what is this God that makes hungry people even hungrier ? What is this God Who creates a fast for the poorest of the oppressed people in the world.

So, I turned to this sister and I said: “With all due respect I want to ask you, why does your God starve you in Ramadan ? Why do you fast in Ramadan sister, just explain to me?”

she said to me: “Sister we fast in Ramadan to remember the poor.”

And a key went to my heart and unlocked it…!!!

I like the Palestinian people but it has nothing to do with Islam.

Then last year in Ramadan again I went to Iran as a journalist and I visited a mosque there, it’s the Bibi Fatima Mosque and I made ‘Wadu’ because I knew how to do itand I put on a ‘Chadur’ and I made a simple prayer:

‘Allah … and I used the word Allah.

“Allah, don’t give me anything. I have everything.Thank you for this journey,but Allah, don’t forget the people of Palestine.”

Then I sat down in this busy mosque with women feeding their children, pilgrims coming and going; but when I sat down, this immense feeling of peace came over me.

Peace and tranquility that I never knew before, such a calm that the tension in my heart went.

There was no sound in my head for the first time in my life as an adult … just deep, deep joy and calm.

I sat there for a long time in this place of calm knowing that somewhere in the universe everything is like this.

Over the course of that evening women kept coming over to me holding me by the shoulders and saying:

“I love you.” At one point a child came over and held my hand and just said in Farsi (Persian): “I love you.”
I said to my friend Nadia, “Is this what it is like in the mosque?” She said, “Not really. I think something is happening.”

I slept that night on the floor of the mosque with a lot of other pilgrims and the next morning, Fajr sounded and I was inside the mosque and I prayed Fajr. Then I came outside and had a cup of chai and the sun was coming up and I had one very specific thought. “O, no… not Islam, please not Islam.”

I just want to say that a couple of strange things happened to me after that. I took the plane back to London from Tehran. As the plane was coming into London the pilot said: “Thank you for flying Tehran airways we’ll be in London in 20 minutes.” And at that point every Iranian Muslim woman took off the hijab and made out like she was from Sex in the City even showing some cleavage.I thought great.Thank goodness, my hands wouldn’t take off the hijab. My hands wouldn’t take off the hijab ! and I thought I was having a nervous break down !

Seven days later I said my Shahada in a London mosque and it was time for me to return to the Qur’an.

This time I opened the Qur’an, and Surah Al-Fatiha (the opening chapter) look like saying to me: ‘Hello Sarah where have you been,
welcome to the religion of peace, joy and tranquility,’and I couldn’t put it down.

Someone once told me — and I feel much like that before Islam — I had given up on God but God never gave up on me. Alhamdulillah.

The question everyone wants to know is how did your family or children react. My two daughters who are very practical and are aged 8 and 10.. They came to me with three questions:

Mummy when you’re a Muslim will you still be mummy?

I said: When I am a Muslim you know what, I will be a better mummy, they said: “Horrayyy!”

When you’re a Muslim will you show your chest?

I said why would you ask such a question?

They said when you come to the school and your chest is showing we are embarrassed and we hate it
and we want you to stop it.

When I am a Muslim I will cover all this area and to which they said: “We love Islam.”

Question no. 1. Will you be the center of our household? Can we rely on you as a mother to be there for us rather than putting your work, your colleagues/friendships or the bar in front of us ?

Question no. 2. Will you remain in the limits that Allah has described for all of us in behavior ?

Question no. 3. Will you be a modest dignified woman in Islam?

Alhamdulillah that is all I have to say.

What I have learnt this year in being a Muslim is this, when you have problems don’t tell to your friends or family …if you can read the Qur’an every night or read 10 min. everyday your Imaan is much, much higher. If you live in a non-Muslim country those of us who do it can go very low very quickly, you must read the Qur’an.

If those who are not on the path of Islam if they come to Islam like me; or, if you’re a Muslim … you are on the path as well, so make sure that you don’t miss those signs in everyday life. All praise is to Allah (Almighty).

US Congressman applauds Modi for ‘bold’ steps in Jammu and Kashmir