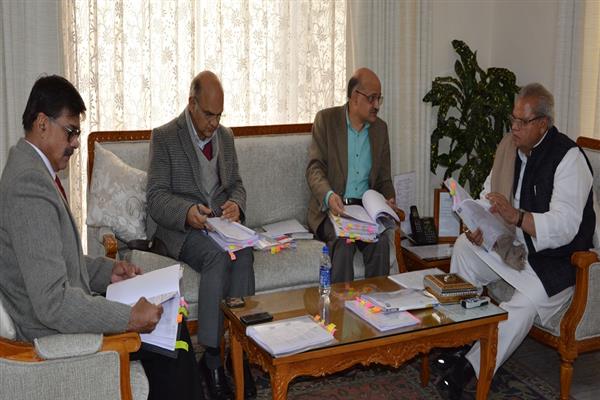 SAC approves ‘Decentralized Policy for Procurement of Supplementary Nutrition’ to ensure transparency, community involvement
Jammu, Jan 25 : The State Administrative Council (SAC) which met here today under the chairmanship of Governor, Satya Pal Malik approved the ‘Decentralized Policy for Procurement of Supplementary Nutrition’ under the Integrated Child Development Service (ICDS) Scheme to bring transparency, accountability and greater involvement of community in the implementation of the nutrition scheme. The policy shall be effective from the procurement year 2019-20.
Under the Policy procurement of nutrition items will have to be strictly as per Recipe menu displayed in the Anganwadi Centres and to be preferably procured from Super Bazaar/Cooperative Stores/Fixed Price Shops/Registered Local Shop keepers on the rates not exceeding the rates notified by FCS&CA.
The new policy has been framed as per the delegation of powers of Panchayati Raj Institutions under the amended Panchayati Raj Act. Under the revised policy, supplementary nutrition shall be procured at Halqa Panchayat/Municipal Ward level.
Based on suggestions of all the stakeholders and analysis of procurement models followed in different States particularly in the States of Kerala, Uttarakhand and Odisha, procurement process under the scheme has been decentralized to the Anganwadi level except for Rice and Wheat which will continue to be procured from Food Corporation of India (FCI) through Department of Food, Civil Supplies and Consumer Affairs.
The procurement at Anganwadi level will be made under the supervision of respective Panchayati Raj Institutions as per the delegation of powers to Panchayati Raj Institutions under the amended Panchayati Raj Act.
The Procurement process will be ensured through various Committees including Procurement Committee-Rural, Procurement Committee-Urban and a Recipe Committee, under the chairpersonship of Sarpanch, Municipal Councillor/Corporator and District Programme Officer respectively.
A District Level Monitoring Committee under the District Development Commissioner (DDC) with representatives from line Departments will on monthly basis review the progress of implementation of nutrition programme under ICDS and submission of report to Mission Director, ICDS, for pointing out any deficiency, and give necessary recommendations for improvement/strengthening of the present policy; resolve inter-departmental issues ,if any, at District Level and ssupervise& monitor procurement, expenditure, quality control, hygiene, and other related issues.
ICDS has six main components viz Supplementary Nutrition, Immunisation, Health Check-up, Referral Services, Non-formal Pre-school Education, and Nutrition and Health Education. The first component, i.e Supplementary Nutrition Programme (SNP), involves supply of food materials to Anganwadi Centres (AWCs) to ensure adequate nutrition for children aged 0-6 years, pregnant and lactating mothers and adolescent girls. However, the implementation of this programme suffered due to various transparency, quality and delay in supply issues. Further, under the centralised system, Anganwadi Workers (AWWs) did not have any control over the quantity and quality of food supply. Therefore, a need was felt for an alternate Model.
Moreover, Supreme Court has issued orders with regard to ICDS directing “Universalization with quality” and prescribed minimum nutrition standards that must be guaranteed and further envisaged decentralization of procurement by eliminating the involvement of contractors, encouraging engagement of local Self-Help Groups and MahilaMandals in supply and distribution of nutrition.
It may be reiterated that with the implementation of the new policy, the targeted groups viz children aged 0-6 years, pregnant and lactating mothers and adolescent girls will be effectively covered.

Srinagar, Jammu to have IT Parks, Towers with Plug & Play features
Govt to set up Jammu & Kashmir IT Infrastructure Development Company
Jammu: The State Administrative Council (SAC) which met here today under the chairmanship of Governor, Satya Pal Malik approved the incorporation of “The Jammu and Kashmir I.T. Infrastructure Development Company Private Limited” under the Companies Act, 2013.
The decision by the SAC is aimed at attracting IT/ITES companies to the State to operate from constructed spaces created by the State and to establish their offices/work facilities on developed land having adequate civic amenities and robust transport connectivity thereby boosting the economy of the State by way of investment, employment and increased economic activities.
With the growth of IT industry and IT enabled Services (ITES), there is a need to undertake IT related infrastructure development in a focused manner in the state. Such infrastructure involves constructed space for being hired out to firms delivering ITES including call centres, outsourcing works, software development, etc. Also, IT Companies establish their offices in areas that have developed amenities i.e., providing residential, recreational and institutional spaces with reliable connectivity to existing and future city centers/transportation hubs.
In both the Capital cities, it is proposed to identify and develop certain areas in the vicinity of cities or in the Metropolitan Region that would act as the basis for planned future growth. For attracting investment to such areas as also to provide adequate infrastructure facilities to I.T. Industry, it is proposed that I.T. Parks/City is planned as a part of it. There will be IT Parks with Towers having the latest facilities to attract world class investment.
Through the IT Parks & Towers, the investors will make full use of the recent extension of the benefits under NE Package to J&K in addition to the existing benefits under Industrial Development Scheme for Jammu and Kashmir (JKIDS), 2017 namely Capital Investment Incentive, Interest Incentive, Central Goods & Services Tax (CGST) Reimbursement, Income Tax (IT) Reimbursement, Transport Incentives (TI) and Employment Incentive (EI).
To begin with, a provision of Rs. 20 Crore has been kept in the Annual Budget of 2018-19 with subsequent annual inflows of the same order and it is proposed to leverage it to raise loans of the value of Rs. 200 Crore. This will be used for creating the necessary infrastructure.

SAC approves diversion of 57 ha forest land for developmental activities
Jammu: The State Administrative Council (SAC) which met here today under the chairmanship of Governor, Satya Pal Malik approved diversion of around 57 ha of Forest land in various parts of the State for undertaking developmental activities in the roads, drinking water, electricity, Railways and Fire & Emergency sectors.
The SAC also approved a proposal for diversion of Forest land for construction of Degree College at Sunderbani in Nowshera Forest Division keeping in view the importance of the project from public standpoint.
The diversion of Forest Land has been approved in pursuance to the recommendations of the 111th and 112th Forest Advisory Committee (FAC) meetings held on 04-01-2019 and 21.01.2019 respectively under the chairmanship of Chief Secretary.
The proposals cleared today include use of forest land for upgrading to Chenani – Sudhmahadev section of National Highway-244, widening / upgradation of R.S pura- Suchetgarh road, Water Supply Scheme at Baba ReshiCheerdara, Transmission line from Alustang – Leh for installation of Towers, construction of Fire and Emergency Station in Ramnagar, erection of Cell Phone Towers and providing Telecom Services in Kishtwar and Udhampur Districts, construction of PMGSY roads in Poonch, Rajouri and Bandipora Districts, construction of 1640 M Span bridge over River Chenab at Sajwal/Jourian and other critical infrastructure of Army and GREF.
Work on these projects could not commence till date due to pending Forest clearance. By virtue of the State Administrative Council decision, the work on all these projects shall get started and give impetus to the developmental projects much to the convenience of the general public.

SAC approves promotion of IPS Officers of 2015 batch
Jammu: The State Administrative Council (SAC) which met here today under the chairmanship of Governor, Satya Pal Malik accorded sanction to the promotion of IPS officers Shri Sudhanshu Verma and Sandeep Gupta of 2015 batch to the Senior Time Scale of IPS (Level 11 in the Pay Matrix) w.e.f 01.01.2019.

Access to Quality Education
SAC approves transfer of land for KendriyaVidyalaya at Doda
Jammu: The State Administrative Council (SAC) which met here today under the chairmanship of Governor, Satya Pal Malik accorded sanction to the transfer of State land measuring 100 Kanals and 14 marlas situated in Village Jodhpur, Tehsil and District Doda to the Kendriya Vidyalaya Sangathan on lease basis for establishing a Kendriya Vidyalaya (KV) School at Doda.
The establishment of KV at village Jodhpur will give access to the students of district Doda to quality education.
The State Government is keen to have a network of JNVs and KVs in all the district of the State so that the children in interior and difficult pockets can have access to high quality CBSE education. In this regard, the State Government has requested the Central Government for opening of additional KVs and JNVs in various districts.