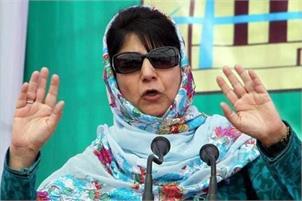 Srinagar, Jan 26 : Former Chief Minister and President Peoples Democratic Party (PDP) Mehbooba Mufti has termed the Governor administration’s order of revoking Zero Stamp duty for women as Undemocratic, stating that the decision taken by an elected government in the state cannot be scarped  by the present dispensation.

“There has to be a limit to how far the Governor’s Administration can go . It needs to draw a line for its actions,” Mehbooba said in a statement issued here.

She said that her government abolished stamp duty on the sale of property registered in the name of females in the state with an objective to empower women and to improve their social status.

However, said Mehbooba, soon after  the stamp duty for women was scrapped by her government last year, properties in thousands were registered in the name of women.

“The decision had come in praise at the national as well as at the international level as it sought to empower women in the real sense by making them stakeholders in real estate and family property. The revocation of this order by the Governor administration makes no sense at all. I demand that the earlier order should be immediately restored,” Mehbooba said.

The former Chief Minister added that women in Jammu and Kashmir have been victims of conflict since decades and the measure taken for their economic and social boost should not have been revoked in such ruthless way by the present administration.  She added that the Governor rule is a transitory arrangement and the present dispensation should avoid disrupting the existing laws and procedures in the state.

Soldier shoots himself in Baramulla