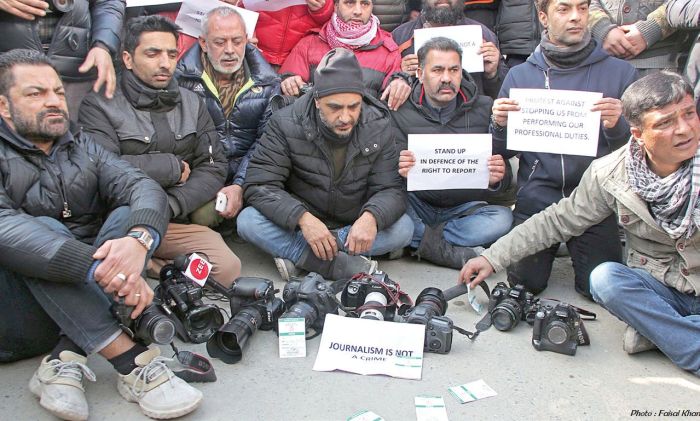 Srinagar: An “overenthusiastic” officer in the security wing of Jammu and Kashmir Police took the decision to bar some journalists with adverse reports against them from attending the Republic Day function here, leading to a chaos, officials said on Monday.

After preliminary enquiry, it was found that the officer of the additional superintendent of police-rank prepared a list of journalists based on a CID report and directed his subordinates to bar them from the event, attended by several dignitaries on Saturday, they said.

According to the officials, the Criminal Investigation Department (CID) gives regular reports on the background of journalists, which includes their possible leanings towards separatists or any of their kin being associated with militant groups or being an overground worker.

However, the journalists have always been allowed to attend government functions without any problem in the past, they said.

The CID report, based on which the officer issued the direction, nowhere mentions that the journalists or photo-journalists should be barred from covering the event, the officials said.

Journalists had on Saturday staged a protest against the Jammu and Kashmir government after several scribes, especially photographers, were allegedly not allowed to enter the venue of the Republic Day function despite possessing valid accreditation passes.

This had prompted Governor’s advisor K Vijay Kumar to issue a statement that the issue would be looked into. “It is learnt that today at Republic Day parade venue in Srinagar some journalists were not permitted to cover the event as the security passes issued to them were found not to be authenticated. The matter shall be looked into,” Kumar, who is in-charge of the Home Department, had said in a statement issued in Jammu.

The mediapersons, carrying placards which read “journalism is not a crime”, had staged the protest in the heart of the city.

The Editors Guild of India on Monday said the denial of entry to several senior journalists into a stadium in Srinagar to cover the Republic Day function was an “unprecedented state-sponsored attack” on press freedom and demanded an inquiry into the incident. (PTI)