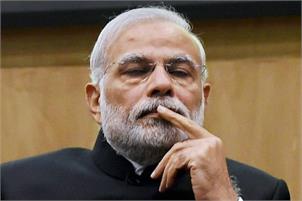 New Delhi, Jan 31 (PTI) Prime Minister Narendra Modi Thursday urged all lawmakers to utilise the Budget Session for having debates with an open mind and said resentment is generated in society against those who do not take interest in discussions in Parliament.

Speaking outside Parliament before the start of the session, the prime minister said there is an awareness among the people in the country and all citizens watch proceedings closely.

“All small incidents reach the common man…due to this, those who do not have interest in discussions, resentment is generated against them,” Modi said.

The prime minister hoped that all lawmakers will keep these public sentiments in mind to utilise the Budget session by taking part in discussions, put forward their views, benefit Parliament, and benefit the government.

He urged lawmakers to make full use of the work that has to be transacted in the session.

“I also know that now when all lawmakers have to go to their respective constituencies, so whatever positive behaviour they show will give them positive benefit in the field as well and it also reflects on how people look at lawmakers,” Modi said.

He said his government’s mantra is ‘Sabka Saath, Sabka Vikas’ and the same spirit will be seen in Parliament.

“We are looking forward to discussing all issues,” the prime minister said.

Indian Embassy asks its nationals in Ukraine to ‘urgently’ contact them

Hope J&K delimitation commission will include views of Buddhists, other minorities in draft: Ladakh MP