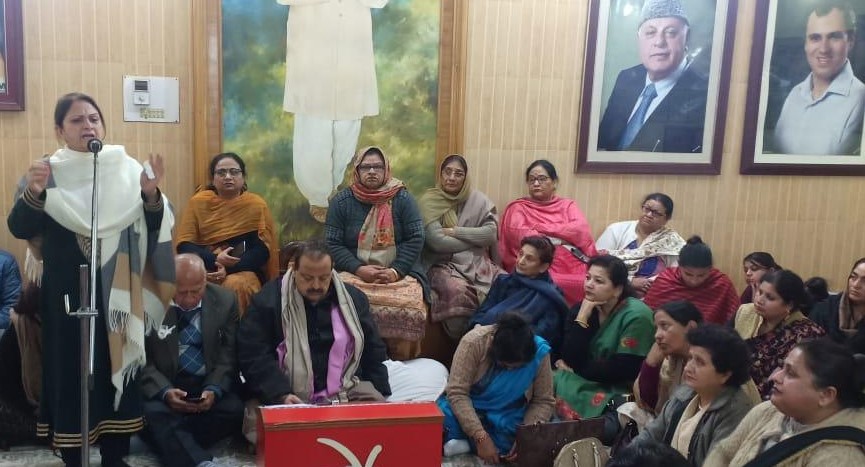 “Those who could not bargain with the PDP the rotational Chief Ministership despite huge mandate are now talking about BJP CM from Jammu”, Mr Rana said while addressing a day-long convention of National Conference Women Wing at Sher-e-Kashmir Bhavan here, presided over by State President Shamima Firdous and organized by Provincial Women Wing President Mrs Satwant Kaur Dogra.

Mr Rana said that BJP’s greed for power witnessed all time low in parliamentary democracy last year when it started hobnobbing with a two-member north Kashmir based political party to form the government. It was almost a shocker for Jammu to see the BJP with 25 MLAs begging to two-member Peoples Conference to form the government by relinquishing the claim of the Chief Ministership. He blamed the BJP for undermining Jammu pride just to enjoy the loaves of power.

“The BJP’s Jammu Chief Minister rant is an insult to the people’s sense of political understanding and perhaps a big political joke”, the Provincial President said while taking the party head on for generating passions and exploiting emotions. He asked the BJP to read writing on the wall and stop nurturing inflated ambitions. The BJP, he said, has lost its face as also credibility in Jammu, which had provided the party a huge space in the mistaken belief of deliverance. However, their experiment turned out a big nightmare for which they paid in terms of under-development of the entire Jammu region. He said the BJP leaders can take solace of having fulfilled their personal aspirations and ambitions but the people of the region at large remained at the receiving end for over three years of their misrule.

He reminded the BJP of its shrinking space in Jammu due to anger among the people for their betrayal and failure in keeping up the commitments.

Mr Rana exhorted the cadre, especially the women wing to gear up in a big way for meeting challenges faced to the State. He said women have a huge role to play in transforming the state and steering it to peace and progress.

Addressing the convention, State President Women Wing Mrs Shamima Firdous hailed the announcement made by the party President Dr Farooq Abdullah about 33 per cent reservation for women in the Legislative Assembly, if National Conference is voted to power with absolute majority.

Mrs Shamima said that political empowerment and economic emancipation of women is imperative for harmonious growth of the society. The women, she said, have greatly contributed in various fields, be it administration, academics or health care. “Given opportunity, women have proven to be second to none”, she said, adding that National Conference has pioneered various measures for the upliftment of this important segment of society over the years.

Mrs Shamima exuded confidence about massive victory for National Conference, saying the people have realized that this is the only party that can steer out the state from the morass.

State Vice President Mrs Bimla Luthra exhorted women to play their designated role in the decision making and development of the State.

Mrs Luthra said that Jammu and Kashmir is passing through a most difficult phase and National Conference alone can bring political stability.

Provincial President Women Wing Mrs Satwant Kaur Dogra highlighted the challenges confronted to the State, and said National Conference is well poised to surmount all these challenges with courage and fortitude.

Mrs Kaur expressed concern over divisive politics being pursued by the parties like BJP and urged people to unite and foil their machinations, which were detrimental to the interests of the state. She said reactionary forces are needed to be isolated politically.

Provincial Vice President Mrs Vijay Laxmi Dutta said that National Conference is a force to reckon with and expressed confidence that given the support of the people, the party will emerge stronger than ever before in the ensuing elections.

Mrs Swaran Lata, former legislator, said that National Conference is custodian of the interests of the people of Jammu, Kashmir and Ladakh. “This is the only party that can ensure equitable development of all the three regions of the State”, she added.

Mrs Deepinder Kour, former legislator, also addressed the convention and urged the cadre to further intensify their mass outreach programme and apprise the people about policies and programmes of National Conference.

Ajas shuts to remember five slain civilians on their anniversary

COVID-19 lockdown: Employees of essential services have to attend duties others to verify from concerned DC office, says Admin

No traffic on Srinagar-Jammu highway, Leh and Mughal roads open