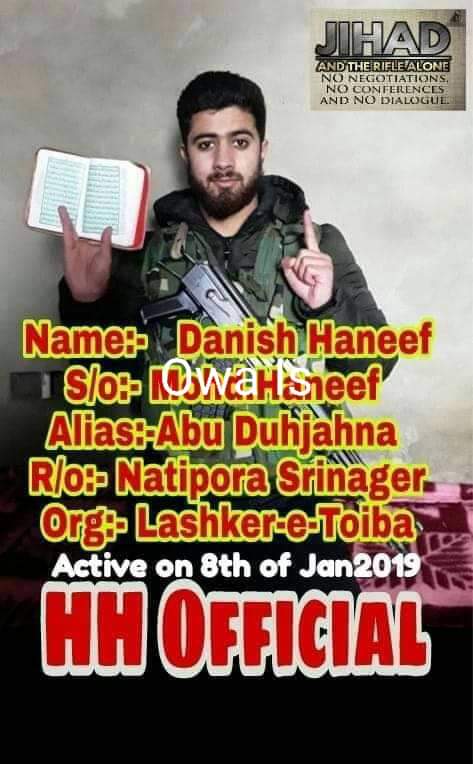 Srinagar, Febuary 02 : The family of a 22-year-old youth from Natipora area of Srinagar on Saturday made a passionate appeal for his return after his gun-wielding picture surfaced on the social media taking his family by a storm.

Danish Haneef Wani went missing soon after he left home for prayers in the nearby mosque on December 30. His family lodged a missing report at police station Chanapora on the next day.

However, a picture of Wani holding a gun and a copy of Qur’an in his hand surfaced on social media on Saturday. According to the picture, Wani has joined Lashkar-e-Toiba militant group on January 8. “He was never detained nor did he participate in any protest. He has completed his B.Com,” said Shoaib Haneef Wani, his younger brother told.

Son of a government employee, Danish would always obey to his parents and never turn down their orders. “On December 30 last year, he left his home to offer Zuhr prayers but didn’t return,” said Shoaib. “He never discussed about joining militancy of leaving home. Today, we were surprised to see his photograph where-in he is wielding a gun and holding a copy of Quran in his hands.

A senior police officer said they were verifying the authenticity of the photograph. “We are in touch with his parents and hope that Danish pays heed to his mother’s passionate appeal and would return home soon,” he said.  In December last year, police had persuaded Ehtesham Bilal, a resident of Khanyar area of Srinagar, who had purportedly joined.(KNO)

Two Clerics Among Five Detained In J&K Under Preventive Laws