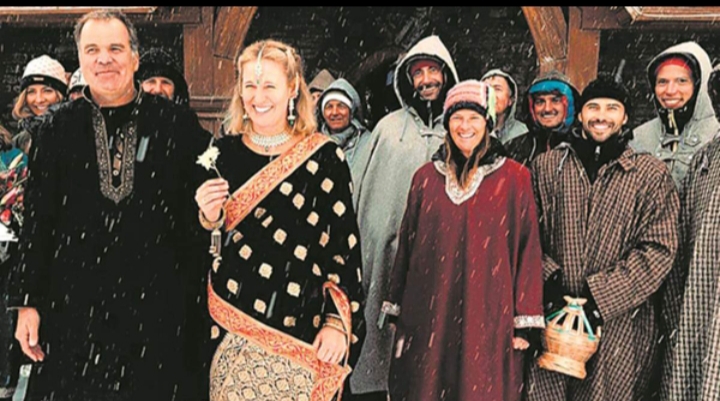 An Australian couple in Indian wedding attire; dozens of foreign skiers wearing Kashmiri Pherans as guests, local priests and snow all around. And when the ceremony ended, Kashmiri music and food followed in the evening.

This was the wedding of Australians Tim Robertson and Kate Hamilton Thursday at St Mary’s church in Gulmarg. It was the first in over three decades at Kashmir’s oldest Protestant Church.

Engaged for a year and fond of snowboarding, it took the couple six months to plan the wedding in Gulmarg. “That day (last year), we were snowboarding back home and we decided to get married. But then Kate wanted a white wedding and in the mountains,” said Tim. A friend of Kate’s who organises skiing trips to Kashmir was roped in and a year later, their wish was fulfilled.

But until Thursday afternoon, minutes before the ceremony the couple walked to the church as heavy snow swirled all around. “Until the last moment, we were not sure that things will happen smoothly. We were surprised to see the skiers at our wedding. I don’t think we could have done this ceremony the way it happened here at any other place. I am speechless,” said Kate.

The couple also had a backup plan if the local priests did not turn up – exchange rings with each other. Despite the heavy snowfall in the Valley, however, two priests from Srinagar travelled to Gulmarg to perform the wedding.

Rev. Vinu Kaul (Associated Priest), one of the priests told The Indian Express that it was an “emotional” ceremony for him. “This church is like 100 years old and our sentiments are associated with this church. So when I came to know that a marriage is going to be held in Gulmarg, I was very happy,” he said. “It was the first such ceremony since 1990.”

“I was also unwell. But, despite all that, I decided to go to Gulmarg. Because it was for the first time in my life, that a marriage was held at Gulmarg, I didn’t want it to miss at any cost,” he said.

At the church, were mostly fellow skiers and for many at the ski resort, it was a different event to attend. “Everyone was so excited. When I found out that a wedding is happening here, we started preparations immediately. By afternoon, the couple came and the ceremony was held,” says Mohammed Yousuf, caretaker of the Church. “It was a new thing for me. In my 15 years here, I only witness people visiting the church during Christmas.”

Youth who was missing arrested in Pulwama