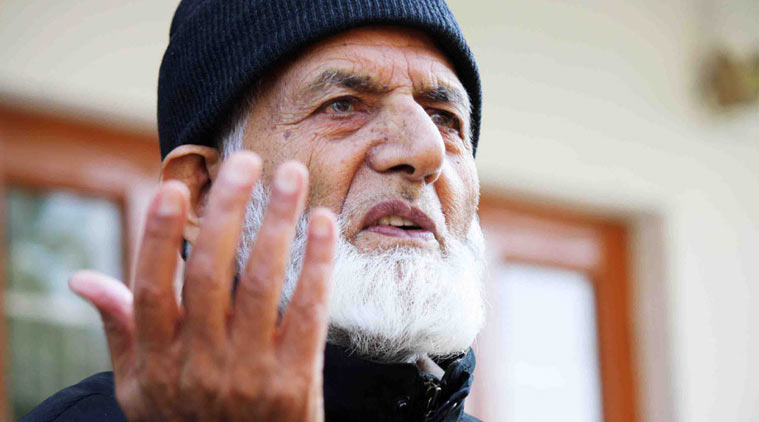 Srinagar, Feb 2:  Hurriyat Conference (G) chairman Syed Ali Geelani while expressing condolence over the demise of maternal uncle of Dr. Ghulam Mohammad Bhat, who is languishing in Tihar Jail since past 9 years said the families of prisoners particularly those who are being kept thousands of miles away from home have a very tough and painful life.

If some dear one departs in between, the pain and agony increases manifold for such families, Geelani said in a statement issued to.

Hurriyat (G) chairman said despite being political prisoners, they are denied every right guaranteed in the national or international jail manual. “Revengeful attitude of the rulers in Delhi has crossed every limit of heartlessness and insensitivity by prolonging their stay in jails,” he said.

“We share the grief with Dr. Ghulam Mohammad Bhat and the bereaved family and pray for eternal peace to the departed soul and courage to the family to bear the painful loss,” Geelani said.

“The case file was shelved, enquiry closed and those involved in his murder are roaming free. Col Bawa, Major Poniya of 17 Jat and a J&K police officer Mushtaq Sadiq were involved in his brutal murder, however, the assassins were provided a safe exit by state authorities,” a Hurriyat (G) spokesperson said in the statement.

He said that late Advocate Regu was a pro-freedom activist. “In a joint operation, he was arrested by 17 Jat and police on February 1, 1998, and killed in custody. His mutilated body was thrown on roadside,” he said.

Though FIR was lodged and the investigation started, the case was later closed without assigning any reason.

The spokesperson prayed for late Regu and expressed sympathy and solidarity with his family.

Centre To Use “Technology” To Seal Borders With Bangladesh: Rajnath Singh

DC Gbl briefs media on Covid situation in the district

Judiciary being used just to keep innocents behind bars: Geelani

Muzaffar Baig grieved over loss of lives in Karnah