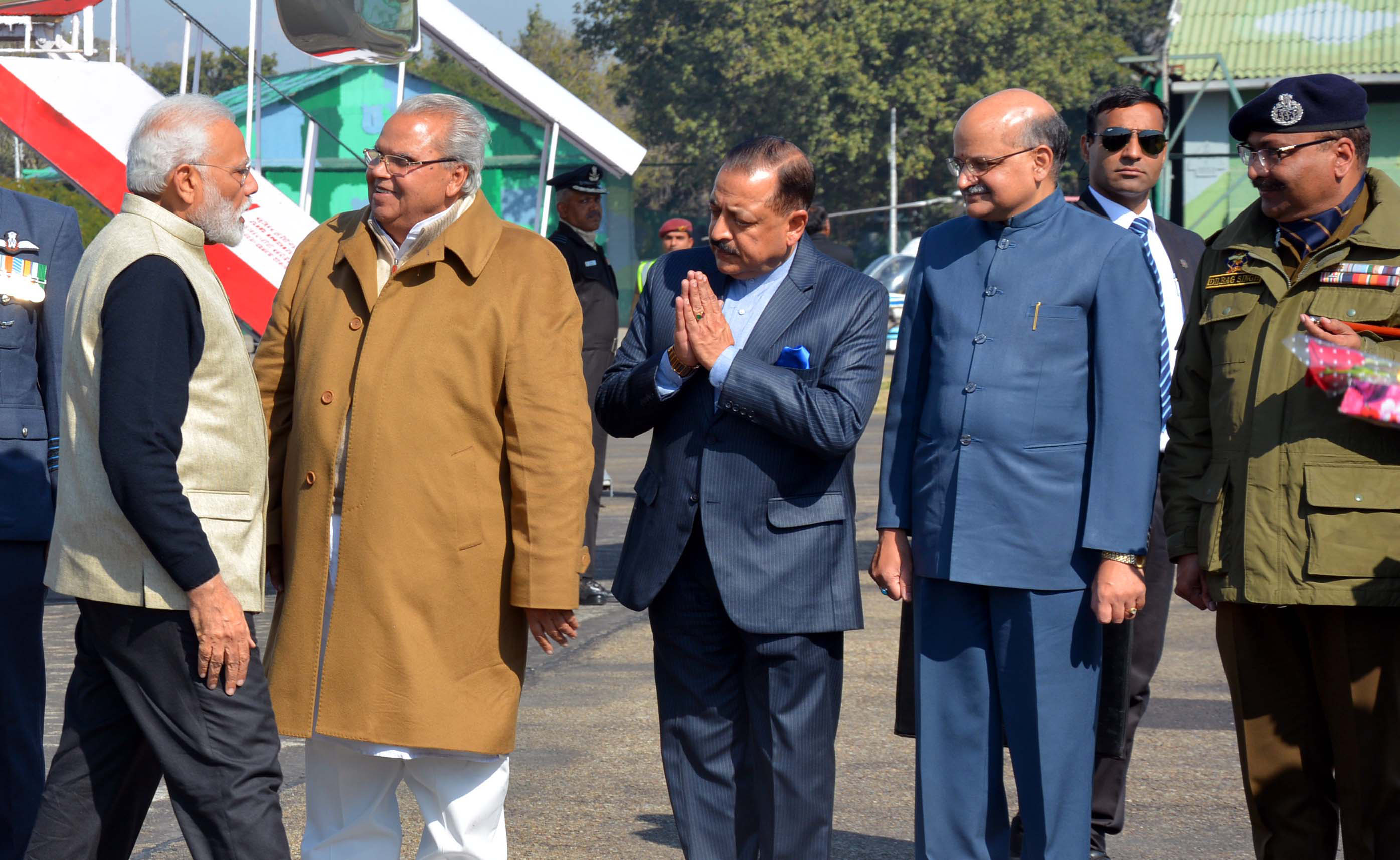 SRINAGAR, FEB 03 : The Prime Minister during his day-long visit to the state, on Sunday, raised the issue of Kashmiri Pandits and said that his government is committed to protect their rights, dignity and pride.

“The country will never forget the violent times in which they were forced out of their homes,” he had said.

Taking the note of Kashmiri Pandits hardships he said, “The Central government is committed to mitigate the hardships of the Kashmiri Pandits, our displaced brothers and sisters and is devoted to restore their pride.”

He also announced 5 more medical colleges to be constructed in the state, adding that a new Indian Institute of Mass Communication (IIMC) will give better professional education to the youth of the state.

He laid the foundation stone for AIIMS, Vijay Pur and AIIMS, Awantipora and for the construction of Northern Regional Centre Campus of Indian Institute of Mass Communication at Jammu and also launch the University of Ladakh, the first-ever varsity in the Ladakh region of Jammu and Kashmir.

“In the last 70 years, there were only 500 seats in Jammu and Kashmir but with the continued efforts of the Bharatiya Janata party, these seats have been doubled. The new 750 bedded AIIMS will not only provide better healthcare facilities to the people of J&K but would also become beneficial for medical students of nearby areas,” the Prime Minister said.

Modi further said, “The transportation in the state is being strengthened in the state. The road network is being improved and new roads are being constructed to make stronger connectivity. Rs. 40,000 crore is being allocated for the same.”

The Prime Minister said that over three lakh tourists visited Leh during the last year and around a lakh also travelled to the Kargil district during that period.

“This figure is around half the total number of tourists who visited the Kashmir Valley last year. Tourism in Ladakh will reach new heights in the coming years and I promise that,” Modi said

Modi said that the Congress has been filling the pockets of middlemen in the name of farm loan waiver.

Praising the Interim Budget presented in Parliament on 1 February, the PM said that it is designed to help farmers as well as people from all sections of the society.

“Over 12 crore families of farmers who have just two hectares of land will now get an annual direct bank transfer of Rs 6,000. This amount shall be credited to their bank accounts in three equal instalments of Rs 2,000,” he said referring to the Prime Minister Kisan Samman Nidhi (PM-KISAN).

The Prime Minister said when Finance Minister Piyush Goyal was reading out the budget proposals in Parliament, “the faces of Congress leaders turned pale”.

Modi said the 10 per cent reservation in jobs and educational sectors for economically weak members of general category will benefit the youth of Kashmir, too.

Authorities have suspended mobile internet services in Srinagar, to ensure that PM’s visit passes off smoothly.

However, many separatists groups called for a complete shutdown in the valley to protest against Modi’s visit. (PTK)