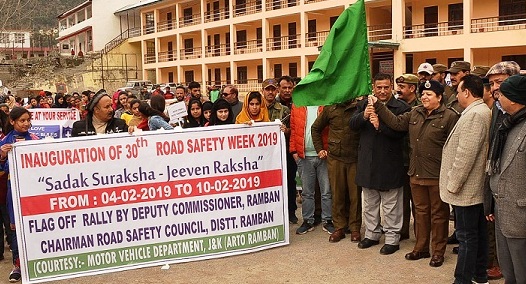 JAMMU, FEBRUARY 04: The 30TH Road Safety Week today commenced across the division with celebration of the event in various parts of all the districts with great enthusiasm.

At UDHAMPUR:The MVD celebrated the 30th  Road Safety Week, on the theme “Sadak Suraksha , Jeevan Raksha”, with District Development Commissioner, Ravinder Kumar flagging off the awareness Van on the occasion.

The DDC urged upon the stakeholders, members of   civil society,  especially youth and other agencies  to dedicate  their efforts  to ensure  safety  of people  besides  restrict  fatal  road accidents in the district . He emphasized on the importance of road safety and need to disseminate information about the safety among the public and the motor vehicle user’s.

At Samba: Motor Vehicle Department today celebrated the road safety week with flagging off an awareness rally by Principal GDC.

The rally was participated by students from various schools of the district which started from GDC and passed through main Chowk , Hari Singh Chowk ,Border Road and culminated at Ground of GHSS.

ARTO and other officers, officials and prominent were present on the occasion.

At Kathua, a Road Safety awareness rally organised by the Motor Vehicle Department to mark the celebration of the Week in which Students from various schools and colleges, NCC cadets and volunteers from NGOs participated.

District Development Commissioner, Rohit Khajuria, flagged off the rally from GDC Kathua where a program was also organized to sensitize students through various means to make the roads safer.

The DDC called upon the students to be ambassadors of road safety and spread the road safety knowledge among family members and friends. He appealed the students to always take measures like wearing Helmets, Seatbelts, abstain from mobile phone usage while driving and alike. He further asked the students to propagate the message of Road Safety in their schools and to all members in their family.

The SSP advised the students to refrain from doing stunts on road and appealed to the school administration to denounce such students.

At Reasi,  Deputy Commissioner, Dr Sagar Dattatray Doifode, inaugurated the National Road Safety Week celebration with flagging off of a cycle awareness rally conducted through the town in which a large number of students participated.

The rally, organised by the Motor Vehicles Department, culminated at the Zorawar Singh Sports Stadium.

DC said that speeding is a major cause of road accidents which can easily be prevented by conscious decision and called upon the youngsters to strictly follow traffic rules and drive within prescribed speed limit.

SSP Reasi, Nisha Nathyal also interacted with the students and spoke on the subject.

At Doda; An awareness rally marked the Road Safety Week celebration in the district with District Development Commissioner Anshul Garg inaugurating the event.

Around 300 students from government and private education institutions, Police, transport unions, Dealers, Driving Institutions, Pollution centre participated in the rally, organised by MVD in collaboration with Traffic Department, Army and others, which was conducted from DC office to Dak Banglow via Bus Stand.

DC exhorted upon the participants to wear crash helmets and seat belts as a safety measure and follow the traffic rules strictly. He said that Doda region is already declared as accident prone location in the state so observing traffic rules in this area becomes more important and unavoidable as well.

SSP Mohammad Shabir Malik, DEPO, ARTO, Dy SP Traffic, Army, Police besides others officers and staff of MVD were present on the occasion.

The rally was taken out from GHSS Ramban which after passing through the main market culminated at same place where the students and participants threw light on importance of safety rules needed to be followed while driving.

DC stressed the need of strict adherence to the traffic norms and assured full cooperation from district administration to disseminate awareness about road safety rules and regulations.

ARTO informed that during the ongoing road safety week, the MVD Ramban shall be organizing various awareness programmes apart from checking of vehicles across the district.

At Rajouri: The National Road Safety Week today began in the district with Motor Vehicle Department organizing an awareness programme which was attended by senior citizens, social activists, media persons and students.

District Development Commissioner, Mohammad Aijaz Asad, flagged off an awareness rally on “Road Safety” which was taken out from the bus stand and passed through main roads, and finally culminated at PWD Dakbanglow Rajouri.

The students in the rally were holding flags, banners, pamphlets and posters for disseminating information on road safety among commuters, drivers and other local people.

The rally started from DC office and passed through Hidyal Chowk to Old Bus Stand to New Bus stand and culminated at the beginning point.

DDC appealed the students to spread awareness among their brethren about safe driving, road safety and avoiding use of mobile phones during driving. He said that the message of road safety week should reach to maximum people and stressed upon all to wear helmets and seat belts while driving.

SSP Angral and ARTO also spoke on the occasion.

A pledge was also taken by the students and others present on the occasion for road safety and obeying traffic rules.

Advisor Khan to meet people at Church Lane on Aug 25