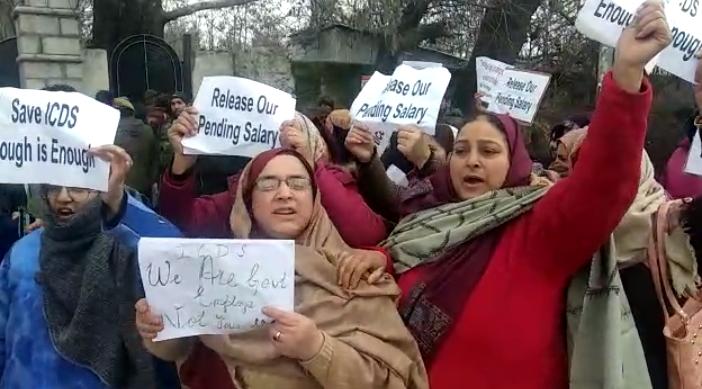 Sopore, Feb 04 : The workers engaged under the Centrally-sponsored scheme, integrated Child Development Scheme (ICDS) on Monday staged protest to press the government over their demands.

Reports said on Monday scores of ICDS workers assembled outside Dak Banglow Sopore and protested non-payment of their salaries and failure on part of the successive governments to regularise them.

For months together, we aren’t paid salaries. Every time we approach authorities, but no one from administration is serious to redress our long pending demand Abida War State president of ICDS workers.

Other women workers who participated in the protest say they come from poor background and hence their voices should be heard.
“Some of us are lone bread earners for our families. If the government is serious to address the concerns of poor and marginalised sections of society, then our concerns should be addressed at earliest they added.

Kashmir is an inseparable part of India : Ram Madhav