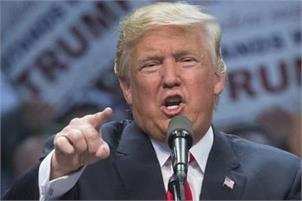 Washington: US President Donald Trump on Sunday said military intervention in Venezuela was “an option”, as Western countries are building pressure on socialist leader Nicolas Maduro to step down and hand over power to opposition leader and self-proclaimed interim President Juan Guaido.

The US, which recognised Guaido as interim president on January 23, is leading a global campaign to drive Maduro, who is accused of being an authoritarian ruler, from office.

“Well, I don’t want to say that. But certainly, it is something that is on the — it’s an option,” Trump told CBS News when asked if the US would send its force in the crisis-wracked Venezuela.

Guaido says the Constitution allows him to serve as interim president as Maduro’s re-election last May was invalid.
Trump has repeatedly warned that “all options are on the table” in Venezuela, as US ramps up the pressure on Maduro through economic sanctions and appeals to the country’s armed forces to switch allegiances.

Under Maduro’s leadership, Venezuela has gone into an economic crisis that left it suffering from hyperinflation and food and medicine shortages.

Maduro refuses to let aid into Venezuela, claiming that it would precede a US-led military intervention.

Trump also said Maduro had requested a meeting with him few months ago but he “turned it down”.

He said the US will not negotiate with the Maduro regime “because so many really horrible things have been happening in Venezuela…That was the wealthiest country of all in that part of the world…And now you look at the poverty…the anguish…the crime.” PTI

Girl burned to death for reporting sexual harassment in Bangladesh

China’s Xi calls on army to be battle-ready