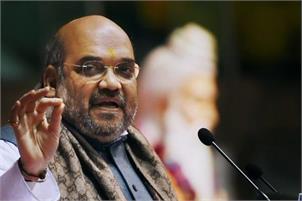 JAMMU, FEBRUARY 5: Just a day after high-profile visit of Prime Minister Narendra Modi to all three regions of the State including Jammu, Kashmir and Ladakh, BJP national president Amit Shah has scheduled his two-day visit to Jammu region on February 24 and 25 to give final touch to six candidates of the BJP for Lok Sabha seats as the party has decided to go it alone in the Parliamentary polls and also firm up the BJP opinion on holding of Assembly elections simultaneously with Lok Sabha polls or not.

On February 24, Shah, who will be accompanied by BJP general secretary (Organizations), Ram Lal, another general secretary and party’s pointman on Jammu and Kashmir, Ram Madhav and Avinash Rai Khanna, will address 60,000 ‘Election Booth Incharge’ of Jammu region at ‘Panna Parmukh Sammelan’. Venue of the address is being finalized by the State BJP leadership as, apart from 60,000 Booth Incharge of the party, other BJP leaders and office bearers would also join the function. (DE)