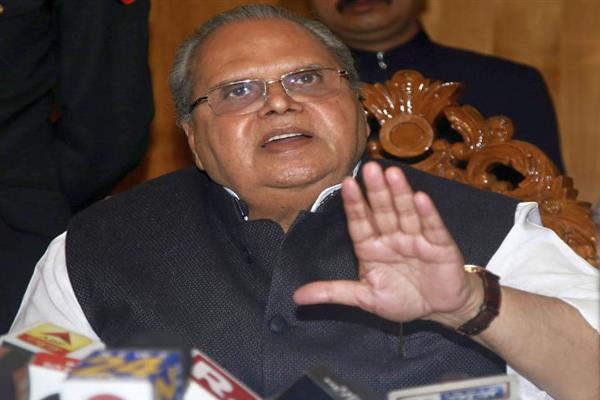 Srinagar, Feb 06 : Jammu and Kashmir Governor Satya Pal Malik today said the remarks of former chief minister Mehbooba Mufti questioning the security forces will not discourage or deter the enthusiasm of our forces operating in Jammu and Kashmir.
The Governor while sharply reacting to the remarks of Mehbooba Mufti wherein she had questioned the functioning of army major Shukla in Pulwama district.
Mufti had said “I have heard about Major Shukla’s bravery, but it is not bravery when you cal children at your camp and beat them ruthlessly”.
The Governor said that this is the election time and Mehbooba Mufti’s party is disintegrating like anything.
“She can say anything to garner support to win the election. There is no need to take her seriously. Our security forces do not need any moral support from people like Mehbooba Mufti,” he said.
“Chunaav ka waqt hai, unki party toot rahi hai, kharab haal mein hai. Wo isi kism ke support se taakat mein aayi thi, unko seriously lene ki zarurat nahi. Humare suraksha balon ka kisi Mehbooba Mufti ji ke bayan se manobal nahi girne diya jayega,” Governor added. (KNS)

Sad that Gov Malik is taking sides, to save culprits: Mehbooba

Why PSA against Abdullah now because Vaiko filed petition in SC: Sibal