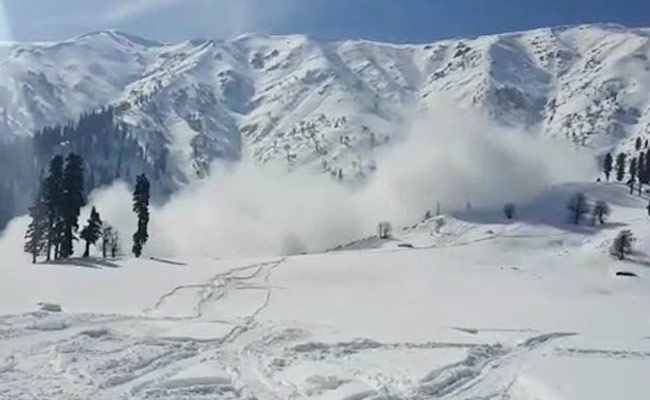 Srinagar, Feb 7, : Eight policemen and two civilians have gone missing after a snow avalanche struck a post at Jawahar Tunnel along the strategic Srinagar-Jammu highway on Thursday evening.

Separately, one person was killed and another is missing while two persons were rescued after an avalanche struck Kokernag area of southern Anantnag district.

Sources told news agency said that a massive snow avalanche hit the police post at Jawahar Tunnel in south Kashmir’s Kulgam district and eight cops were among ten persons who were buried under it while as many had a miraculous escape.

Director General of Police said as per the information received, there was a snow avalanche in the area. A rescue operation has been launched to trace the missing, he told news agency .

He said that two persons are from fire and emergency department, two cops (dog handlers who handle crime cases), two civilians (accused in some case), four cops are reported to have been trapped under the avalanche.

Following the information, the local police, CRPF and SDRF launched a rescue operation to trace the missing.

Meanwhile, one person was killed while two others were rescued and one more is still trapped after an avalanche struck Sunbradi area of Kokernag in south Kashmir’s Anantnag district on Thursday evening.

Reports reaching news agency  said that the avalanche hit a residential house at Sunbradi, resulting in the on spot death of a person whose body was recovered while as two more persons were rescued by the local volunteers and police.

According to reports, one person is still trapped under the snow and efforts are on to retrieve him.

He said two persons were rescued and have been hospitalised while as one is still missing. The rescue operation is on to find him, he said. The DC identified the deceased as Bashir Ahmad.

Meanwhile, an official said that a rooftop of a mosque was damaged after it collapsed due to snowfall at Khamoh, Rafiabad in north Kashmir’s Baramulla district.

The official said that at Heewan area of Boniyar, Baramulla, one house of Wahab Najar also got damaged after it collapsed due to snowfall. A cowshed of Haleema Begium at Khas Dajan Boniyar also collapsed and suffered damage, he said.

The official further said that one boat ‘Meenar’ of Mushtaq Raga son of Mohammad Sultan was also damaged after it collapsed at Chinar Bagh in Dalgate, Srinagar. (GNS)

Kashmiris continue to suffer due to lingering dispute: Hurriyat (M)

Fiddling with Art 35 A will turn situation worse: Radha Kumar