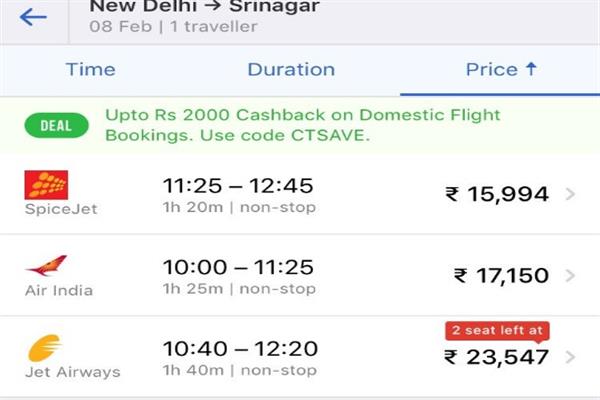 Srinagar, Feb 07 : The airfare on flights operating from New Delhi to Srinagar is over the roof leaving the fliers upset and student community aghast. From Delhi, the air fare to capitals of other countries like Kabul and Dubai are much less than what it costs to reach Srinagar, which otherwise is a journey of one-and-half-hour.
During the Prime Minister Narendra Modi’s visit to Srinagar, J&K Governor Satya Pal Malik took up the issue of rising air fares with the PM. Malik told Modi that the air prices have increased to 28 thousand rupees which amounts to a back and forth flight to Dubai.
Highlighting the odd bearing on “behalf of Kashmiris”, Malik told Modi … “Jab athayees hazaar (28,000) mai Dilli se yahan aana paday tou kesay tourism behtar hoga, (How would tourism thrive here if we pay same amount from Delhi to Srinagar in which a person would fly to Dubai back and forth).”
The immense hike in airfare has made it unaffordable for common people to travel by air which is the only mode of connectivity for Kashmiris with the outside world during the winters and snowfall. Over the last two days, Kashmir received heavy snowfall leaving the only road link between Srinagar and Jammu closed.
Many locals and tourists told news agency that from the past one month passengers traveling to Kashmir are getting tickets at highly expensive rates. Many tour operators in the valley said that due to huge increase in air fare tourists from other states are being forced to cancel their visit to the valley. (KNS)

Around 450 militants operating in J&K: Army

Rampant accidents in Valley must be probed: Dy Mayor

IED detected in Assam, 10 pc turnout till 9 am