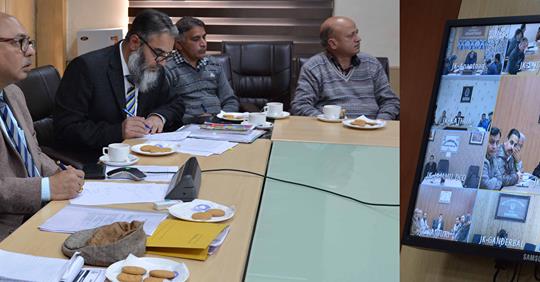 JAMMU, FEBRUARY 11: Advisor to Governor, K Skandan today took stock of district wise registration of beneficiaries under the Pradhan Mantri KisanSamman Nidhi (PM-KISAN) in the State as he sought details from the Deputy Commissioners through video conference here during a meeting.

While interacting with the DCs, the Advisor sought progress on the registration of the beneficiaries under the newly launched scheme on daily basis. He stressed on finalization of the database in each district by identification of eligible farmers as per defined format and simultaneously uploading of the data on the PM-KISAN portal. He directed them for personal monitoring the exercise and intervention to resolve issues, if any.

The Advisor directed the concerned functionaries to put in place the modalities for speedy execution and impactful implementation of the scheme as per operational guidelines of the programme. He asked the Director, NIC to coordinate with the District administration for uploading the data.

It was given out that several teams have been constituted and Gram Sabhas organized in every district to achieve the targets within the set timeline.

Pertinently, under PM-KISAN farmer families having cultivable land holding of 2 hectares and less will be provided direct income support at the rate of Rs. 6,000 per year. This income support will be transferred directly into their bank accounts in three equal instalments of Rs. 2,000 each. The Union Government has asked the States to finalize, certify and set the timelines for uploading the district-wise beneficiary list to the PM-KISAN portal.

Govt all set to extend insurance cover to poultry farms