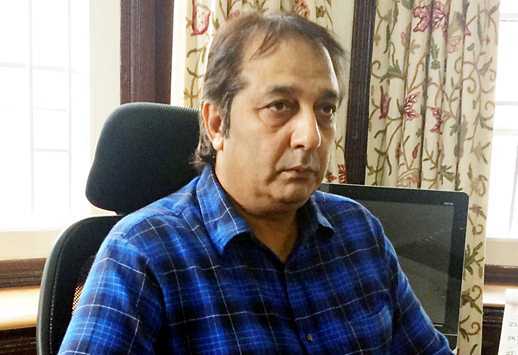 JAMMU, FEBRUARY 12: Divisional Commissioner Jammu Sanjeev Kumar today said that more than 75 percent of roads in Jammu Division have been cleared and rest will be restored within two to three days which were blocked due to heavy snowfall and incessant rains.
IG Traffic Alok Kumar, IGP Jammu Manish K Sinha and Deputy Commission Jammu Ramesh Kumar were also present on the occasion.
He said that about 1400 kilometre PMGSY roads in Ramban, Doda, Kistwar, Rajouri, Poonch and adjoining areas have been cleared out of 1700 kilometer along with 808 kilometre of PWD roads out of 1100 kilometre while work is in progress to clear the rest of the roads.
The Div Com informed that more than 4 thousand vehicles have crossed the tunnel which were stranded due to bad weather conditions. He said that adequate number of men and heavy machinery including snow-cutter and JCBs have been deployed to clear the roads obstructed due to land slide.
He informed that there is adequate supply of ration, LPG, medicine, petrol and other essential commodities in snow prone areas. He further informed that thousands of stranded passengers have been airlifted from Jammu to Srinagar and from Doda and Kishtwar to Jammu in cases of emergency.
Div Com further said that 90 per cent of power supply has been restored which was affected due to heavy snowfall in Doda, Ramban and Kishtwar and rest will be reinstate within 2 days.
He appreciated the work done by the officers of traffic, police and SDRF along with other concerned departments in providing timely relief to the stranded passengers.
The Div Com appealed the people to be patient and calm as the administration is working hard to provide all necessary facilities to the affected people besides ensuring them smooth supply of essential commodities. He said that administration needs support of people to serve them better in these adverse climatic conditions.