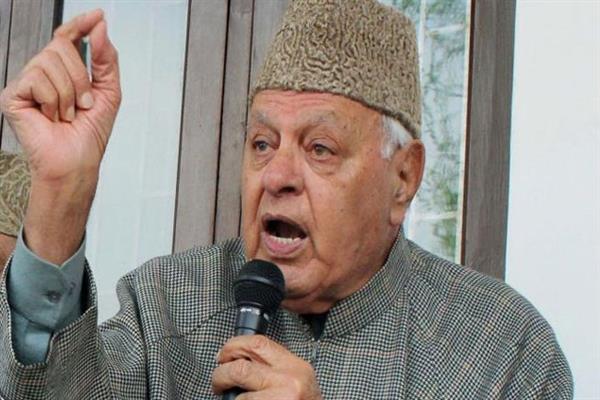 Srinagar, Feb 13 : Jammu and Kashmir National Conference President Dr. Farooq Abdullah today lashed out at government of India and governor administration for denying people of Kargil their rightful share in the newly constituted Ladakh Division.
Dr Farooq said that the people of Kargil are being punished only to pursue the agenda of divisive politics. “All along it was decided that the division headquarter will be positioned on a rotational basis between Leh and Kargil and all the departments to be divided equally between the two districts. But the incumbent government issuing an SRO in favour of only one district has severely dented the genuine aspirations of people in Kargil and adjoining areas,” he said.
Asserting that the move is aimed keeping in mind the forthcoming LS and Assembly elections, he said, “BJP in desperation is misusing the governor administration who without taking cognizance of the aspirations of the people in kargil is acting like a pawn. However this move is bound to backfire on them and will certainly not them in achieving the desired goals but will inevitably create animosity between the communities.”
Demanding revocation of SRO 110 immediately, Dr Farooq said, “The way people of Kargil have come out in freezing temperatures and protested against the decision should serve as an eye opener for those who have whimsically decided on keeping division headquarters at Leh only.”
Supporting the demand of having a rotational division headquarters between Leh and Kargil, he said, “It’s imperative for the governor administration to concede to the rightful demands of Kargil and adjoining areas. I am therefore hopeful that the governor will issue a fresh SRO in this regard that will satisfy the genuine demands of the whole region.”
Taking a dig at the recent constitution of committee of secretaries by the government mandated to look into the demands of the people of Kargil, he said, “When the decision to grant division status to Ladakh was taken, no prior discussions, deliberations were held with people of the region. Number of deputations had already conveyed their desire to have headquarters on rotational basis between Leh and Kargil. Unfortunately, such demands were not considered for reasons know to governor administration. This shows how biased and politically motivated the administration is.”
Earlier party vice president Omar Abdullah had also supported the demand of keeping rotational headquarters between Leh and Kargil and said that the formation of a committee to look into the issue is just a measure to gain time and any delay in granting the rightful share to Kargil will have far reaching adverse impact on the hearts and minds of the people of Kargil who have always been a peace loving community.

BJP implementing its agenda in JK through Governor: Mehbooba