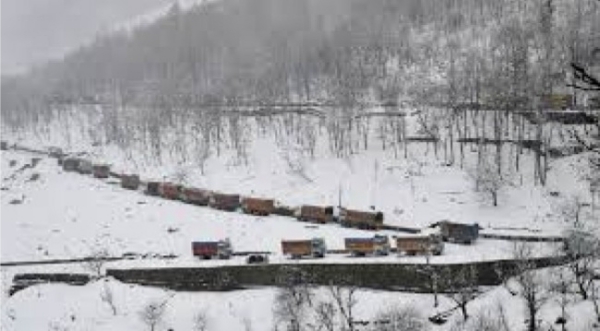 SRINAGAR, FEBRUARY 13: The Divisional Commissioner Kashmir, Baseer Ahmad Khan today said that on the strict directions of Governor Satya Pal Malik, Advisors, BVR Subrahmanyam, the Divisional Administration of the valley worked round the clock to review the situation daily and now the situation is totally under control and stabilized regarding the essential commodities and other important services which were temporarily disturbed due to the recent snowfall and blockade of National Highway.
The Divisional Commissioner made these remarks while briefing the media persons here today.
He further informed that today 3000 trucks, 504 oil tankers, 3400 Light Motor Vehicles (LMV) reached valley and there is no dearth of essential commodities in the valley and tomorrow more stranded vehicles will reach the valley. He said that the divisional administration has also abolished the earlier order directing petrol pumps to go for rationing of fuel.
He said that with more trucks coming tomorrow, there is no question of scarcity of any essential commodity. He said that people don’t need to worry with regards to essential commodities.
The Div Com said that further 1000 stranded passengers were brought from Jammu via special flights to ease the rush. Similarly for the first time GATE students were airlifted free of cost to Jammu.
The Div Com said that the administration had made a comprehensive plan to tackle the situation. He said that the amount of snowfall was unprecedented and has happened after many years but the prompt action of administration helped to minimise its effects. He said that 9-10 ft snowfall was received at higher reaches, but that didn’t deter the working of administration.
He said that 24X7 control rooms at divisional, district and police department, gave round the clock information to public and people were made aware of entire situation.
Regarding roads, the Div Com said all district connecting roads and other essential roads were cleared of snow within 19 hours, which is a record of sorts.
He said that in markets, special squads have been activated to control the rate of essential items and take action against traders indulging in profiteering or hoarding.
He said that power supply was heavily impacted due to the snowfall as supply was reduced to just 600 MW. He said that 500 transformers were damaged but the department worked round the clock and restored the power supply to 1250 MW within shortest possible time. He said that 50-60 transformers are repaired daily.
The Div Com said that the power supply and heating system of hospitals worked round the clock and it was ensured that there is no disruption and unease to patients and attendants.