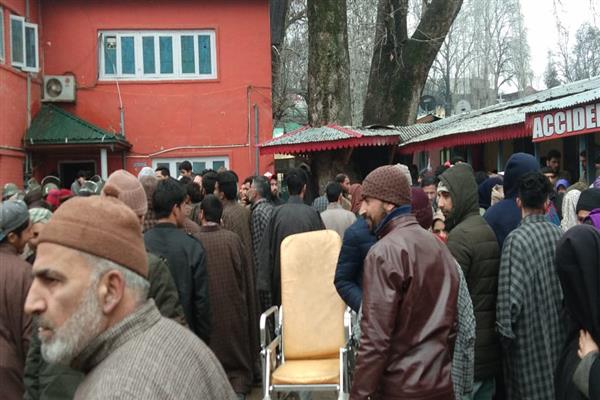 Bandipora, Feb 13 : A three months old baby died at Bandipora hospital here on today after she was allegedly administrated a vaccine in absence of doctors, family members to accuse para medical staff of negligence.
Family members alleged that Umaiya Muzaffar, daughter of Muzaffar Ahmad resident of Gundpora Rampora, three months old died, after she was allegedly administered a vaccine in absence of doctors.
The family members of the victim Umaiya said that she was taken to Bandipora hospital to get routine vaccination done for their child. They said that, she was administered vaccine in the absence of doctors by some nurse. My daughter was given poison in place of vaccine,” he said. He said that only few nurses were present there, there was no doctor present in the hospital.
Family members claimed she died because she was given poison. Had she been attended by doctors instead of nurses, she would have survived, added that he died because doctors didn’t attend patient. They said that, it is clear that the death of the patient was caused due to the pure medical negligence.
Soon after the death, a chaos broke out in Bandipora hospital, Family members and relatives ransacked Bandipora hospital and broke the window glasses of District Hospital and beat staff members of hospital. The victim’s family members demanded stern action against the responsible. The family members also demanded that Probe should be ordered into the matter, so that culprits will be punished.
When contacted DC Bandipora said that, I cannot say anything unless an enquiry was got conducted. We will look into the matter and take necessary action, if any lapse is found” he said. He added that, a team has constituted to inquiry in this regard. Meanwhile Bandipora police register case Fir No 13 of 2019 u/s 304A RPC and start investigation. Meanwhile, the alleged negligence at the Bandipora hospital has led to a public outcry with many taking to social media to express their anger. (KNS)
previous post

Deepika on Ayushmann Making it to TIME’s ‘Influential People’ List

SAC approved winding up of JAKFED