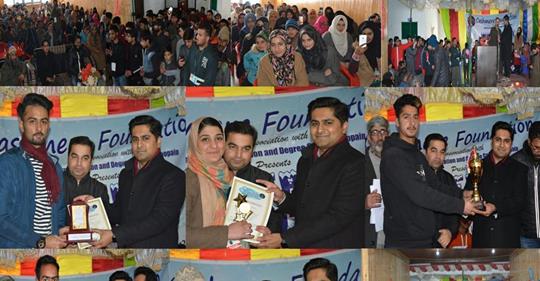 Many cultural programmes including poetry, Naat, skits were presented by the students in the festival where large gathering of people including parents appauled these performences. Participants were also present from other districts of the Kashmir valley.

All the performances were appreciated by the audience and the best performances were later awarded. The achievements of sports persons of the district was also acknowledged and 17 participant teams of Shopian Premier League were provided with uniforms and sports kits.

Deputy commissioner Shopian Owais Ahmed on the occasion said that this is the first winterfest being organised in the district and the response of the public particularly students has been very encouraging. The enthusiasm of the participants can be judged by the fact that despite bad weather, the fest was housefull. He also said that this gives a very good opportunity of interaction between students and the administration. He further added that the youth of Shopian is very talented and the same was exhibited in the fest. All performances were very impressive and the administration will provide all facilities for further polishing of this talent.

It is pertinent to mention here that such events provide platform to youth of the district and students from whole part of the district participated will full enthusiasm.

Rupee gains 26 paise against US dollar in opening trade

No outdoor sport for my daughters, feminists can say whatever they want to: Afridi