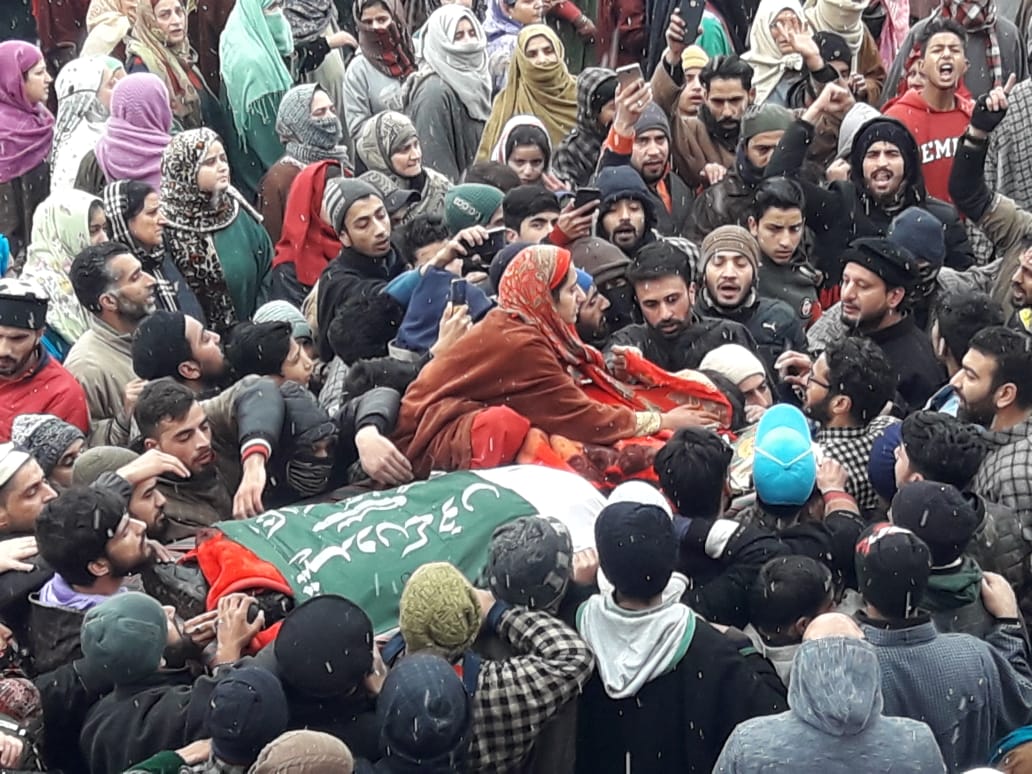 Thursday’s attack at Lethpora, Pulwama, is a wake-up call. It could signal a more lethal phase of violence.

The nation must stand together in grief, and with resolve. The last thing the country can afford at this juncture is petty politicking. Indeed, the entire spectrum of Kashmiri politics should come together against this tide of violence and death.

For, make no mistake, it is a tide of death and nihilism that we face.
Stern steps must be promptly taken to stop the violence that erupted in Jammu on Friday. It will only make the cycle of hate go around faster.

One of the most worrying aspects of the emergent situation is that the young have no respect left for any political leader, including the Kashmiri separatists such as Syed Ali Shah Geelani and the Mirwaiz.
This was reflected in the extremely poor turnout (of candidates as well as voters) in the local bodies’ polls in autumn. A huge question mark hangs over the Lok Sabha and Assembly elections, which are due. Attacks such as February 14’s will dampen the prospect further.

It is tragic that at such a fraught time, sections of the ruling establishment have been disparaging a large part of the spectrum of ‘mainstream’ political parties.

After the Lethpora attack, some in power at the Centre targeted political opponents. Sections of the media joined to accuse some ‘mainstream’ parties of apparently being sympathetic to militants.

This indicates a blindness to the depth of the current challenge to national integrity.

Those in authority must look carefully around them and introspect deeply — the response of most people in Kashmir was a sobering indicator that efforts to win hearts and minds have failed.

The readiness of Kashmiri youth of this generation to die in battle is a radical change from the 1990s. Most of those who undertook suicide attacks in the lethal phase from 1999 to 2001 were Pakistanis — few Kashmiris of that generation of militants wanted to die.
This generation is far more radical.

On the first day of 2018, a Kashmiri teenager undertook a suicide attack at a CRPF camp quite close to Thursday’s attack site, putting up a ferocious fight before he was killed.

Another notable change is that the very lethal Jaish-e-Mohammed has taken the lead over the past year or so. It appears that the ISI now trusts tough operations to Jaish more than to either Hizb-ul Mujahideen or Lashkar-e-Taiba.

A large number of Jaish and other operatives have slipped across the border over the past five months. A number of Pakistanis already lurk in north Kashmir, having infiltrated over the past five or so years. Most have so far lain idle, perhaps waiting for a plan to unfold.

The guerrilla war is likely to become more strident and lethal when these fighters become operational.

The strategy of killing Kashmiri boys in south Kashmir over the past four years, while largely ignoring the lurking foreigners in the north, has had a very negative fall-out.
It has created the impression in Kashmiri minds that Indian forces are determined to kill Kashmiris — this has resulted in a phalanx of support for militants, including foreigners, which gives them great operational advantage.

Hatred has never been more intense in the minds and hearts of young Kashmiris.

The tragic fact is that it is only the young who matter now. Most of those who pick up guns or pelt stones are teenagers or children in their pre-teens. The guerrilla war holds the lure of romance in their minds. They are fearless and hugely motivated — even to die.

Thursday’s attack, a suicide mission, was one of the most stunning in the past three decades. It claimed 49 CRPF men’s lives, right on the national highway, in the middle of a particularly harsh winter. The attacker was undeterred by the massive convoy of 2,500 paramilitary soldiers, into which he drove an SUV.

Only half a dozen other attacks in Kashmir — including those on Srinagar’s cantonment in December 1999 or on the state assembly in October 2001 — and on our Parliament in December 2001 have been more audacious.

In terms of numbers killed, the toll here is now worse than in the massacres at Chittisinghpora in 2000 and at Wandhama in 1998.