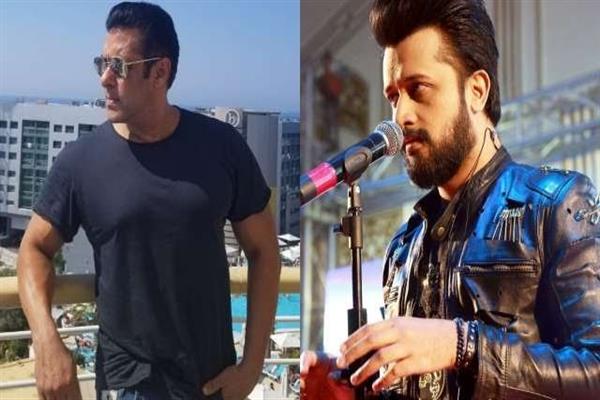 The dastardly Pulawama attack, All India Cine Workers Association announced a blanket ban on Pakistani actors and artists in India. They issued a statement which was tweeted by a media agency stating, “All India Cine Workers Association announce a total ban on Pakistani actors and artists working in the film industry. #PulwamaAttack.” The statement also read as ‘If any organisation insist on working with Pakistani Artists will be banned by AICWA and strong action will be taken against them.’

Now as per reports in a portal, Salman Khan will be replacing Pakistani singer Atif Aslam in the superstar’s upcoming home production Notebook. Khan has asked his production house to do so with an immediate effect and the song will be re-recorded with a new singer in a couple of days. An official announcement from the team of Notebook is yet to come on the decision.

When the Pulwama Attack took place last week, Salman had tweeted, “My heart goes out for the Jawans of our beloved country and their families who lost their lives as martyrs to save our families… #YouStandForIndia”

Meanwhile, talking about Notebook, the film marks the debut of lead actors Pranutan Bahl and Zaheer Iqbal. The film is directed by Nitin Kakkar and it will hit the screens on March 29, 2019. The superstar tweeted the poster saying, “Bina mile kabhi pyaar ho sakta hai? Introducing @PranutanBahl & @iamzahero in this unique love story directed by @nitinrkakkar #Notebook”

Pranutan is the granddaughter of legendary actor Nutan and daughter of popular film and TV actor Mohnish Bahl.
(DNA)

Padma honour validation for people who had confidence in my talent: Manoj Bajpayee